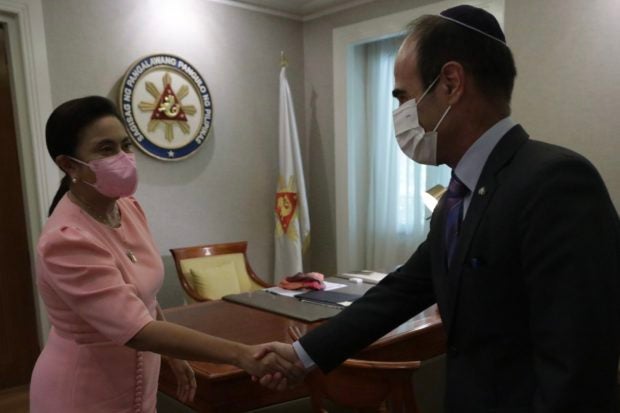 Vice President Leni Robredo welcomed the Ambassador of Israel to the Philippines Ilan Fluss to her office at the Quezon City Reception House on Wednesday, June 8, 2022. (Photo by Jay Ganzon / OVP)

MANILA, Philippines — Outgoing Vice President Leni Robredo on Thursday received the ambassador of Israel and thanked his country for the assistance it provided to help the agriculture sector that bolstered the ties between the two nations.

In a statement issued by the Office of the Vice President, Robredo met with Israeli Ambassador to the Philippines Ilan Fluss on Wednesday wherein they discussed common concerns like agriculture, water management, and promoting innovation, which greatly benefitted Filipino farmers.

“During the courtesy call, VP Leni expressed her gratitude for the signing of agreements that will further enhance the relations of Israel with the Philippines,” OVP said in a statement.

“This, after Philippines and Israel signed this week the Investment Promotion and Protection Agreement (IPPA) and launched the Joint Economic Commission (JEC) and cooperation agreement with the Israel Innovation Authority,” it added.

“VP Leni also thanked Amb. Fluss for their country’s support to Filipinos in the fight against COVID-19,” OVP noted.

Robredo is on her last few days as Vice President, as her term ends on June 30.  Her spokesperson Barry Gutierrez said in previous interviews that they are preparing for a smooth transition with the team of Vice President-elect Sara Duterte-Carpio.

Robredo spox: We’ll brief Sara Duterte on our programs, but up to her to continue them