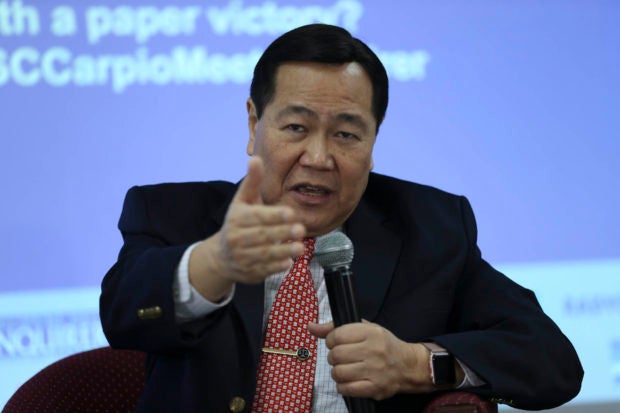 He said the president-elect’s statement was “a dramatic and surprising sea change on the West Philippine Sea issue.”

“We can now breathe a heavy sigh of relief as if the strongest new political typhoon forecasted to imminently hit our country since World War II suddenly dissipated before reaching our shores,” Carpio said.

Carpio was reacting to Marcos’ statements on the maritime dispute with China in his interview with select media members on Thursday.

“We have a very important ruling in our favor and we will use it to continue to assert our territorial rights. It is not a claim. It is already our territorial right,” said Marcos, making the issue of WPS first foreign policy pronouncement since being proclaimed President-elect.

In July 2016, an international arbitral tribunal in The Hague ruled to invalidate Beijing’s claims to almost the entire South China Sea. The Asian superpower did not participate in the arbitration and refuses to recognize the ruling.

“Our sovereignty is sacred and we will not compromise it in any way,” Marcos said. “We will not allow a single square, and maybe make it even smaller, a single square millimeter of our maritime coastal and up to 200 kilometers rights to be trampled upon.”

He said the Philippines would consistently talk to China with a “firm voice” but the country would not go to war over the maritime dispute, which is “the last thing we need right now.”

“So, we have to continue to discuss with them the conflicting claims that we have with China and that China has with other members of the Asean (Association of Southeast Asian Nations),” he said.

In one presidential debate in February, Marcos said the Philippines under his leadership would “ask the help of Asean because they are crafting the code of conduct for Asean and China.”

For over two decades now, China and the 10-member regional bloc have been trying to formulate a binding agreement called the Code of Conduct in the South China Sea to help resolve the overlapping claims to the whole or parts of the waterway and to prevent an escalation of the maritime dispute.

The South China Sea, which includes the West Philippine Sea and parts of the country’s EEZ, straddles one of the world’s busiest sea lanes atop what is believed to be large oil and gas reserves.

Del Rosario, who led Manila’s arbitration team in The Hague, said it was his “fervent hope” that President Duterte’s successor would stand by his words to protect the West Philippine Sea for the benefit of Filipinos.

Both Carpio and Del Rosario are critical of Mr. Duterte’s pivot to China as he set aside the country’s arbitral victory in exchange for investments and aid from Beijing.

In June last year, Mr. Duterte called the country’s arbitral victory “just piece of paper.” The President claimed that invoking it could trigger a war with China.

Carpio and Del Rosario also were among the conveners of 1Sambayan coalition, which supported Vice President Leni Robredo against Marcos in the May 9 presidential elections.

Carpio has also argued that Marcos should have been disqualified from running for president due to a previous conviction for violating the tax code.

He was strongly critical of Marcos’ stand in January, when the former senator said: “That arbitration is no longer an arbitration if there’s only one party. So, it’s no longer available to us.”

Marcos was referring to China’s rejection of the arbitral ruling, leaving the Philippines with no commitment from Beijing that it would respect the decision.

This position was “a betrayal of the country” and “infinitely worse” than the stand taken by Mr. Duterte, Carpio said then.

“While President Duterte’s policy has been to put aside the arbitral award but to raise it at the appropriate time in the future, Marcos Jr.’s policy is to completely adopt the position of China that the arbitral award is null, void, and utterly useless,” he said.

Challenge to next generation

Despite Marcos’ pronouncement, Carpio said Filipinos “must remain resolute, with double efforts and be ever more vigilant in defending the West Philippine Sea.”

“The arbitral award is a legacy of my generation to your generation. As the ranks of my generation become thinner, we ask the youth to begin manning the ramparts in defense of the West Philippine Sea,” he added.

Speaking at the same webinar, Carl Schuster, professor of military science and diplomacy at Hawaii Pacific University and retired US Navy captain, said it was too early to tell precisely what Marcos’ policies would be.

He said the President-elect’s initial pronouncements suggested that he would attempt to balance the Philippines’ relations with both China and the United States, the country’s treaty ally.

He noted that while Marcos said he would be firm in dealing with China regarding the West Philippine Sea issue, he also “expressed willingness to work” with Beijing.

“President-elect Marcos Jr. will find that balancing relations between two competing superpowers at a time of great geostrategic challenges in Asia is akin to walking a tightrope,” Schuster said.

According to him, China aggressively employs its economic power when “disappointed,” and it is not yet clear if the US will increase its investment and trade with the Philippines, noting that Washington “places great emphasis on human rights, often above security considerations.”

“While Washington currently is hopeful about his potential foreign policy actions, it is skeptical about his future human rights policies,” Schuster said, noting of the human rights violations committed during dictatorial rule of the father of the new president.

—WITH A REPORT FROM NESTOR CORRALES