“Sa ngayon, sa pakikipagpulong namin [As of now, in our meeting] with the Philippine Consulate General in New York, there are about 38 or 39 documented cases,” DFA Assistant Secretary for Migrant Workers’ Affairs Paul Raymund Cortes said in a virtual presser hosted by the Presidential Communications Operations Office.

These cases were those reported “from last year to present,” Philippine Consul General to New York Elmer Cato told INQUIRER.net

“These were the same cases we reported in the past year but these also include Filipino victims of criminal incidents,” he added.

In March, the consulate reported at least three attacks against elderly Filipinos, one of whom was “beaten unconscious and robbed” while another was punched and kicked more than 125 times by her assailant.

According to Cortes, the consulate extends assistance to victims of hate crimes while local authorities aid them with the filing of necessary cases.

(They also provide legal redress, counsels provided by the host government which is the U.S. and the consulate also helps in spreading awareness not only in New York but also elsewhere to explain the elements of a hate crime and how to avoid situations wherein it becomes very difficult to manage.)

(In fact, in these documented cases, there are victims who are in the subway, sometimes they were not aware that they were being yelled at and there are references to you going back home to your own Asian country…sometimes the victims are traumatized.) 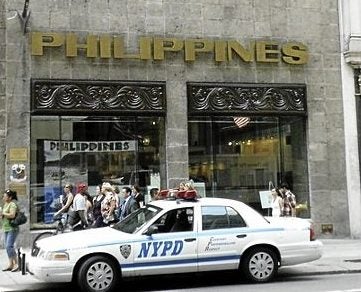 The Philippine Center on Fifth Avenue in New York

Cortes said the consulate also helps victims in getting “psychosocial help or therapy” amid the trauma they experience following an attack.

He advised Filipinos to reach out to the consulate and local authorities if they have fallen victim to such assaults.

“Kung may mga kababayan tayo nakaranas ng ganito, all they have to do is not just approach the consulate but may mga local authorities, malaki ho yung sistema ng Amerika when it comes to helping not only Asians but the rest of the nationalities as far as hate crimes are concerned,” he added.

(If there are fellow Filipinos who have experienced this, all they have to do is not just approach the consulate, there are also local authorities, America’s system is wide when it comes to helping not only Asians, but the rest of the nationalities as far as hate crimes are concerned.)