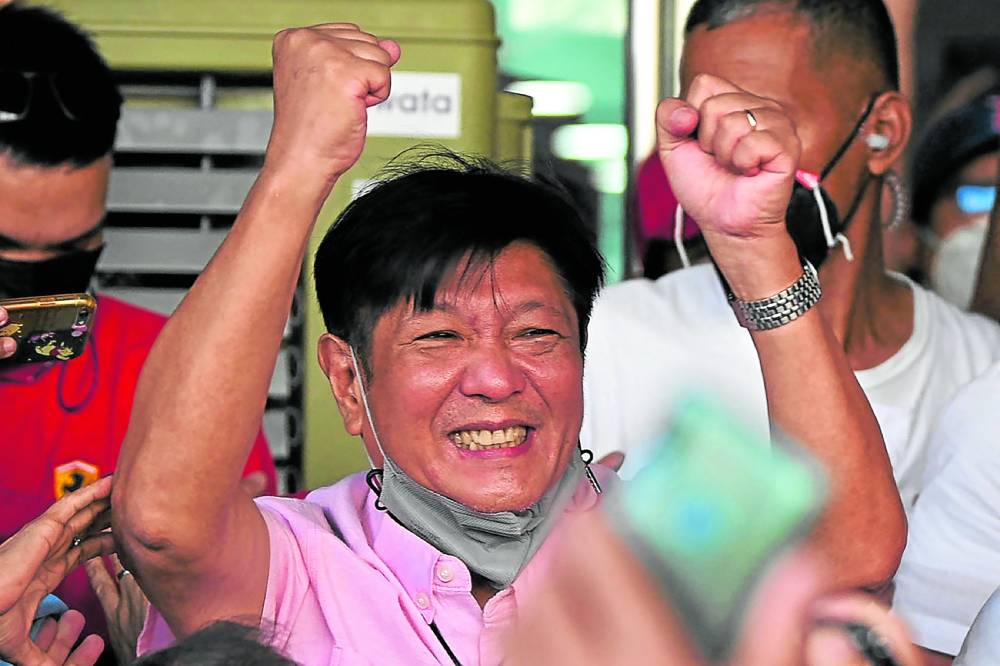 Presidential candidate Ferdinand Marcos Jr celebrates with supporters as he arrives at the campaign heaquarters in Manila on May 11, 2022. – The son of the late Philippines dictator Ferdinand Marcos on May 11 claimed victory in the presidential election, vowing to be a leader “for all Filipinos”, his spokesman said. (Photo by Ted ALJIBE / AFP)

The leaders of the United States, China and Russia have sent congratulatory messages and expressed readiness to work with the incoming administration of presumptive president Ferdinand “Bongbong” Marcos Jr.

The United States said on Thursday (late Wednesday in Washington) it would seek close security ties with the Philippines under its next president, the son and namesake of the late dictator, but made clear it would raise human rights as well.

In a statement, the White House said US President Joe Biden spoke with Marcos in a phone call and congratulated him for his apparent victory in the May 9 elections.

“President Biden underscored that he looks forward to working with the president-elect to continue strengthening the US-Philippine alliance, while expanding bilateral cooperation on a wide range of issues, including the fight against COVID-19, addressing the climate crisis, promoting broad-based economic growth and respect for human rights,” the White House said.

Xi pointed out that China and the Philippines are neighbors “linked by the sea and partners that have stood together through hardships.”

He added that Manila and Beijing relations had been “strengthened and elevated, bringing benefits to the peoples of our two countries and making contributions to regional peace and stability.”

“Currently, China and the Philippines are both at a critical stage of development, posing important opportunities and broad prospects for our bilateral relations. I highly value the development of China-Philippines relations,” Xi said.

“I am ready to build a good working relationship with you to preserve our good neighborliness, work for common development and deepen our Relationship of Comprehensive Strategic Cooperation so as to bring benefits to our two countries and two peoples,” he added.

According to the Russian Embassy in the Philippines, President Vladimir Putin had sent a congratulatory message to Marcos and noted that relations between the two countries were traditionally friendly.

“I hope that your efforts as head of state will facilitate further development of the fruitful cooperation between Russia and the Philippines in various areas. This meets in full the interests of our nations and is in line with the endeavors to strengthen security and stability in the Asia-Pacific region,” the Russian leader wrote in his message.

US Secretary of State Antony Blinken also sent Marcos a congratulatory message, saying “we look forward to working with President-elect Marcos to strengthen the enduring alliance between the United States and the Philippines.”

“As friends, partners and allies, we will continue to collaborate closely with the Philippines to promote respect for human rights and to advance a free and open, connected, prosperous, secure and resilient Indo-Pacific region,” Blinken said.

The top White House official on Asia, Kurt Campbell, acknowledged there “are some historical considerations” that initially may cause “some challenges in the communication.”

“But obviously [the] Philippines plays such a critical, important role and we will seek to continue close partnership in the security realm and increasing trade and economic ties,” Campbell said.

“Our expectation is we’ll be able to continue to work closely,” he said at the US Institute of Peace.

Marcos Sr. and his first lady, Imelda, were notorious for their graft and high-flying lifestyle during their 20-year rule that ended in a people power uprising in 1986.After ruling the former US colony for two decades with support from the United States, which saw him as a Cold War ally, Marcos went into exile in Hawaii in the face of mass protests and with the nudging of Washington.

In October 2012, a US appellate court upheld a $353.6-million contempt judgment against Marcos Jr., Imelda and the Marcos estate for violating an injunction that barred them from dissipating assets of the estate.

During a press briefing on Wednesday, Marcos campaign spokesperson Vic Rodriguez ignored a reporter’s question on how the presumptive president would face the contempt judgment.

The younger Marcos will succeed President Duterte, who has waged a brutal war on drugs that rights groups said has killed tens of thousands.

Campbell, not mentioning human rights, said that “relations under President Duterte really rebounded towards the end, at least at the strategic level.”

After taking office in 2016, Mr. Duterte used profanity to denounce Barack Obama after the then US president raised rights concerns. But Mr. Duterte enjoyed vocal support from Obama’s successor Donald Trump and the United States across administrations has backed the Philippines in maritime disputes with China.

In fact, the United States has upped its engagement in the Philippines and Southeast Asia in recent months to combat China’s “coercion and aggression” in the region. —With reports from Reuters and INQUIRER RESEARCH