With less than a month to go before the May 9 elections, Vote Pilipinas has partnered with Robinsons Malls to bring the #BumotoKa Caravans to Filipinos in different locations across the country. 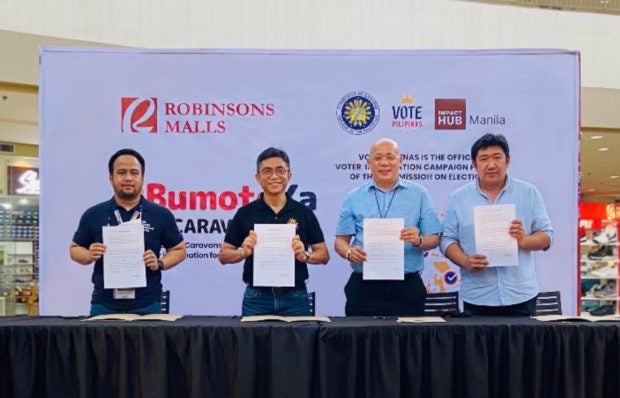 Vote Pilipinas Founder Ces Rondario said, “After getting around 7.9 million people to register to vote, our goal now is to make sure that Filipinos will actually go out and vote during election day. We want to arm our fellow Filipinos with reliable and factual information about this year’s elections, so they can make informed decisions when voting. Thanks to Robinsons Malls, we’re able to hold our #BumotoKa caravans in different parts of the country. Now we can educate more citizens, especially the youth and new voters, on everything they need to know about the upcoming elections, so they can cast their ballots with confidence. With Robinsons Malls’ help, more people across the Philippines will understand the importance of voting and why their vote matters.”

The #BumotoKa Caravans aims to promote voter education and responsible voting in the Philippines. The program helps enlighten residents, especially the youth and new voters on the importance of voting, what positions to vote for, and how to vote in the coming elections.  Vote Pilipinas is joined by the Commission on Elections (COMELEC) to demonstrate how the Vote Counting Machine works, how to properly shade ballots, and how ballots are processed on election day.  For the latest information on Vote Pilipinas and the #BumotoKa campaign, visit www.votepilipinas.com!