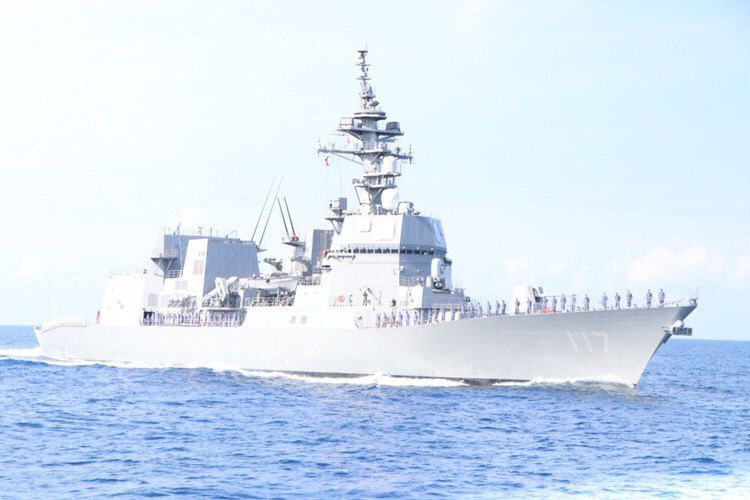 JS Suzutsuki sailors are seen on her deck preparing to man-the-rail, a time-honored custom observed by navies around the world. NPAO

Philippine and Japanese naval warships conducted tactical maneuvers near the West Philippine Sea on Saturday after the foreign and defense ministers of both nations expressed “serious concern” over the situation in the East and the South China Sea.

The Suzutsuki, which is currently deployed in Southeast Asia, later proceeded to the Subic Freeport for a port call.

“The arrival of the Japanese contingent in the country and the accommodation and support being extended to them underscores the strong bilateral relations between the Philippines and Japan. Both countries espouse the promotion of peace, stability and maritime cooperation in the region,” the Philippine Navy said in a statement.

“Japan concurred with the Philippines’ long-standing objections to unlawful maritime claims, militarization, coercive activities and threat or use of force in the South China Sea, and expressed its support for the July 2016 arbitral award on the South China Sea,” a joint statement following the two nations’ 2+2 talks read.

The bilateral talks were held as Navy officials broke ground for a new P50-million hangar for the Naval Air Wing (NAW) at Naval Base Heracleo Alano in Sangley Point, Cavite City, on Friday.

The construction of the facility, which will be the NAW’s biggest hangar, is expected to be completed by January 2023 and will be able to accommodate four aircraft, eight offices and a large conference room.

The NAW currently has three operational hangars and intends to have a total of six at the naval base in Cavite City.

“This will significantly enhance the facility readiness, work safety, and morale of NAW by providing adequate space and protection for the aircraft and maintenance personnel from variable weather conditions,” the NAW said.

The NAW is awaiting the arrival of two Robinson R44 helicopters from the United States this year as part of a grant under the US Foreign Military Financing Program. This is in addition to the four Cessna 172 trainer planes handed over by the US government on February.

The NAW is looking to acquire more aircraft, including additional AW159 helicopters and Beechcraft C-12 Huron, under Horizon 3 of the military’s modernization program, which begins next year. INQ