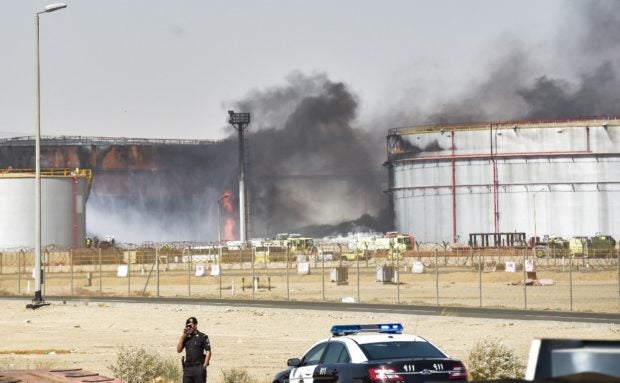 A policeman stands guard as firefighters extinguish the last hearths of fire at a Saudi Aramco oil facility in Saudi Arabia’s Red Sea coastal city of Jeddah, on March 26, 2022, a day after a Yemeni rebels attack. – Yemeni rebels said they attacked a Saudi Aramco oil facility in Jeddah as part of a wave of drone and missile assaults today as a huge cloud of smoke was seen near the Formula One venue in the city. (Photo by AFP)

The Philippine Embassy in Riyadh, Saudi Arabia, has confirmed that no Filipino nationals were affected in the series of attacks by Yemeni rebels on oil facilities in Jeddah on March 20 and March 25. “The Embassy and the Philippine Consulate General in Jeddah will continue to coordinate with local authorities and the Filipino community to ensure the safety and security of Filipinos in the Kingdom,” the embassy said. It advised Filipinos to remain vigilant and to continue to monitor security advisories. It also urged them to contact the embassy in Riyadh or the Consulate General’s office in Jeddah in case of emergency.