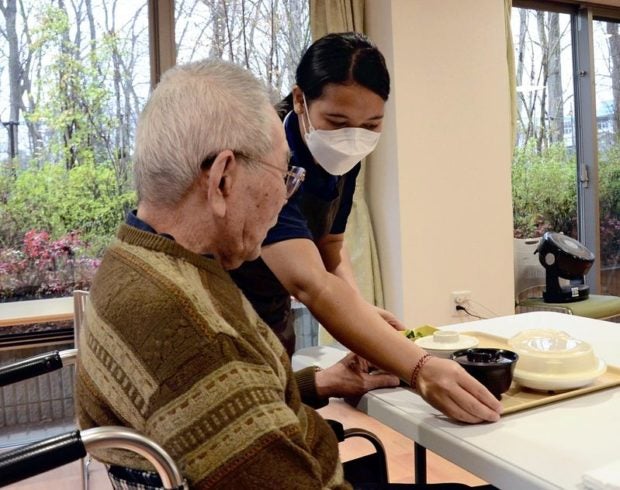 Foreign workers had waited a long time for permission to enter the country. Many have found employment at nursing homes, which have suffered from a lack of labor.

“Specified skilled worker” residence status allows foreigners working in 14 designated job categories — including nursing care and construction — to stay in Japan for five years. The government launched the program in April 2019, with the aim of attracting more overseas workers.

Earlier this month, Ni Made Susiyantini was seen serving food at the Kagiyamaen elderly care home in Iruma, Saitama Prefecture. “The meals are ready,” the 26-year-old Indonesian said to care recipients. “They look tasty, don’t they?”

Susiyantini came to Japan on March 12 and started working at the facility on March 17 after a three-day quarantine period. “I’d like to talk about various things with the care recipients,” she said.

Susiyantini studied at a Japanese language school and worked part-time at a nursing home in Japan for two years from April 2018. After deciding to work in the country again, she successfully sat exams for Japanese and specified nursing care skills in August 2020, while in Indonesia.

In February 2021, she was offered a job at Kagiyamaen via the Japan Care Support Cooperative, a registered institution that assists companies across the country. However, due to the pandemic, she was obliged to stay in Indonesia for months without knowing when she would be able to enter Japan. Facing an uncertain future, her family advised her to find a job in Indonesia.

“[Now I’m in Japan], I want to sit more Japanese language and nursing exams to raise my skill levels as a care worker,” she said.

Susiyantini and another foreign national had been scheduled to start at Kagiyamaen around May 2021. But in January that year, the government in principle banned the entry of non-resident foreigners. Kagiyamaen signed a contract on behalf of the pair for an apartment in November 2021, when restrictions were temporarily relaxed, but their entry was postponed again due to the spread of infections.

“I didn’t expect it would take so long for them to come to Japan,” said care home director Daisuke Miyakoshi. “I want them to start by getting used to the working environment and to become actively engaged with the work.” Miyakoshi, 53, plans to assign them general nursing care jobs, such as assisting with bathing and eating.

According to the Health, Labor, and Welfare Ministry, since the end of January 2020 — when the novel coronavirus began to spread — more than 9,000 people outside Japan have sat the exam for specified nursing care skills. However, it is thought many examinees have been unable to come to Japan.

Expectations are running high in the nursing care industry in the midst of a serious labor shortage. Many facilities have been affected by the ban on non-resident foreign nationals entering the country.