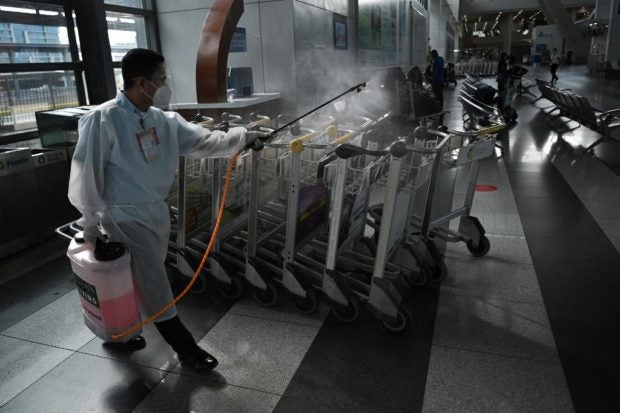 FILE PHOTO: A worker disinfects chairs at the airport in Manila on August 4, 2020. (Photo by Ted ALJIBE / AFP)

MANILA, Philippines (Updated) — Starting April 1, fully vaccinated foreign nationals coming from all countries will now be allowed entry to the Philippines even without an entry exemption document, Malacañang said.

According to the resolution, foreign travelers coming into the Philippines must carry an “acceptable proof of vaccination.”

Children below the age of 12 are exempted from this rule provided they are travelling with their fully vaccinated foreign parents, Ablan said.

“Right now, as long as they’re able to present to us acceptable proof of vaccination, then they may enter the country. If you recall, even under then Spokesperson Karlo Nograles, we would weekly update the public regarding the countries wherein the government accepts nationals to come in. Ngayon, wala na. There is no more listing of which country the foreign national originates from,” Ablan said when asked about the difference of the new IATF resolution from the previous ones.

“As long as they’re able to present valid proof of vaccination and [comply with] other guidelines then they will be accepted in the country,” he added.

Fully vaccinated foreign nationals are still required to present a negative result of an RT-PCR test taken within 48 hours or a negative laboratory-based antigen test taken within 24 hours prior to their departure from their country of origin or first port of embarkation “in a continuous travel to the Philippines, excluding lay-overs; provided, that, he/she has not left the airport premises or has not been admitted into another country during such lay-over,” according to Ablan.

These foreigners should also have passports valid for at least six more months at the time of their arrival to the Philippines.

According to Ablan, foreign nationals entering the country will no longer be required to observe facility-based quarantine but shall still self-monitor for any sign or symptom for seven days with the first day being their arrival date.

“However, they are required to report to the local government of their destination should they manifest any symptoms,” he added.

Prior to arrival, these foreign nationals are also required to obtain travel insurance for COVID-19 treatment costs from reputable insurance providers, with a minimum coverage of US$35,000.00 for the duration of their stay in the Philippines, Ablan also said.

“Except for foreign spouses and/or children of Filipino citizens and former Filipino citizens with Balikbayan privileges under Republic Act No. 9174, including their foreign spouse and/or children who: one, are not balikbayans in their own right, and two, are traveling with them to the Philippines, they must have valid tickets for their return journey to the port of origin or next port of destination not later than 30 days from date of arrival in the Philippines,” Ablan further clarified.

An earlier IATF resolution only exempted foreign spouses and children of Filipino citizens who are from visa-required countries, or who are restricted foreign nationals from the entry exemption document requirement provided that they have been issued a temporary visitor’s visa.

Meanwhile, the IATF had required foreign nationals from visa-free countries to secure an entry exemption document if they intend to stay in the country for more than 30 days.

Foreigners may enter PH starting May 1