PUERTO PRINCESA— Authorities found 20 dead sea turtles in a large net that was left submerged in the waters of  Balabac on the southern tip of Palawan by a group of Chinese poachers caught by a Philippine naval patrol on Thursday.

“There were 20 deep sea turtles trapped in the net. The DENR (Department of Environment and Natural Resources) personnel decided to just bury them,” Palawan Governor Abraham Mitra told the Philippine Daily Inquirer Monday.

The six Chinese fishermen accused of poaching endangered sea turtles were charged Monday with violation of the Fisheries Code and the Wildlife Act at the Palawan Regional Trial Court, said Adelina Villena, chief lawyer for the Palawan Council for Sustainable Development.

If found guilty on all charges, the Chinese fishermen could face up to 24 years in prison. They were not required to enter a plea on Monday and a date for their arraignment was not immediately set, Villena said.

Quoting military reports, Mitra said the Chinese nationals could have been mainly engaged in poaching for marine turtles, a protected species, and may have laid down the nets themselves.

The six Chinese nationals were caught on board a motorboat after failing to outrun a pursuing naval patrol boat and have since been detained at the provincial jail.

Local officials said they were investigating reports that the Chinese fishermen were paying some local communities to catch the turtles for them.

One of the six Chinese, who had told authorities they were from the mainland province of Hainan, spoke Tagalog.

“We’re mobilizing Balabac residents to help us in our campaign to stop these incursions by Chinese fishermen in our waters,” Mitra said.

When they were caught on Thursday, the Chinese’s boat yielded five live marine turtles, three dead ones and assorted fishing paraphernalia, including butchering tools.

China’s foreign ministry spokesperson said Beijing was “paying attention to the incident,” had spoken to the Philippine side and had sent staff from the Chinese embassy in Manila to visit the detainees.

“We have asked the Philippine side to ensure the safety and legal rights and interests of the Chinese fishermen and handle the issue in an early and fair manner,” spokesperson Hong Lei told a press briefing.

Authorities discovered a batch of giant green turtles after intercepting the fishermen’s speedboat, said military spokesperson Major Niel Estrella. A joint team from the Philippine Navy, Coast Guard and the environment department made the seizure.

The boat was likely attached to a mother ship that escaped after the six fishermen were detained, Estrella said.

Nine of the turtles were already dead, but three were released alive back into the waters after being tagged, Glenda Cadigal, a wildlife specialist at the Palawan Council, told The Associated Press. 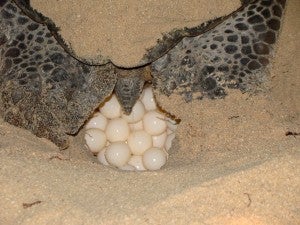 Sea turtles, also known as Chelonia mydas, are often caught for food and for use in traditional medicine. They can grow as long as 5 feet (150 centimeters) and weigh as much as 290 pounds (130 kilograms). They are endangered because of overharvesting of both eggs and adults.

Dozens of Chinese poachers had gotten away with illegal fishing in Palawan in the past after national government officials, often the Department of Foreign Affairs, interceded in their behalf amid Chinese government pressure.

Last year, six Chinese fishermen also on a speedboat were arrested near the same area with more than 50 turtles, many of them already butchered and one bearing a monitoring tag of the University of the Philippines Marine Science Institute, said Cadigal.

The fishermen’s trial is still ongoing.

“These kinds of practices endanger the lives of other creatures in the sea because marine turtles have their function in the balance of the ecosystem,” Cadigal said.

She said the turtles feed and provide nutrients to the sea grass bed, allowing new leaves to sprout and be eaten by small fishes.

Palawan, about 820 kilometers southwest of Manila, is the nearest Philippine province to the disputed Spratly Islands in the South China Sea, which are being claimed by the Philippines, China, Taiwan, Malaysia, Vietnam and Brunei.

Relations between the Philippines and China recently soured after Manila accused Beijing of interfering with its oil exploration activities in the sea China claims in its entirety. With AP, AFP reports