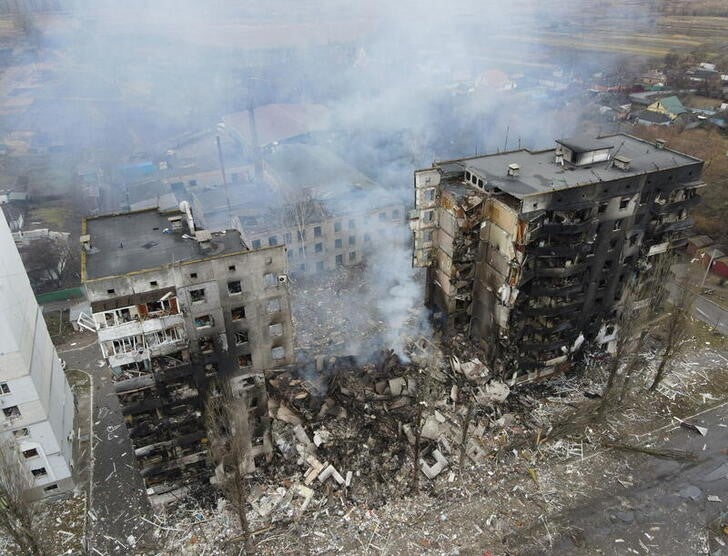 FILE PHOTO: An aerial view shows a residential building destroyed by shelling in the settlement of Borodyanka in the Kyiv region, Ukraine March 3, 2022. REUTERS/Maksim Levin

MANILA, Philippines — The Philippine government is poised to undertake a mandatory evacuation of Filipinos who are still in Ukraine as the Department of Foreign Affairs (DFA) raised to Level 4 the crisis alert status in the eastern European country.

“Due to the rapidly deteriorating security situation in Ukraine, the Department of Foreign Affairs has raised the crisis alert level for all areas in Ukraine to Alert Level 4 (Mandatory Repatriation),” the Philippine Embassy in Warsaw, Poland, said in an advisory on Monday.

The Philippine Embassy in Warsaw has jurisdiction over Filipinos in Ukraine.

The embassy assured it will extend assistance to Filipinos in Ukraine together with a rapid response team, which is currently assisting Filipino nationals for repatriation and relocation.

The DFA said it continues to closely monitor the political and security developments in Ukraine.

Before the government raised crisis alert level 4, the repatriation of Filipinos from Ukraine was only voluntary.

So far, more than 30 Filipinos, including Filipino-Ukrainian children, have been repatriated to the Philippines since Russia launched an invasion of Ukraine in late February.

READ: DFA: More Filipinos, including kids and their Ukrainian mothers, arrive in PH

Meanwhile, 21 Filipino seafarers from Ukraine are set to arrive in the Philippines on March 8.

Russia aims to erase us, Ukraine’s Zelenskiy says on day 7 of war

Putin calls on Ukraine army to remove leadership in Kyiv