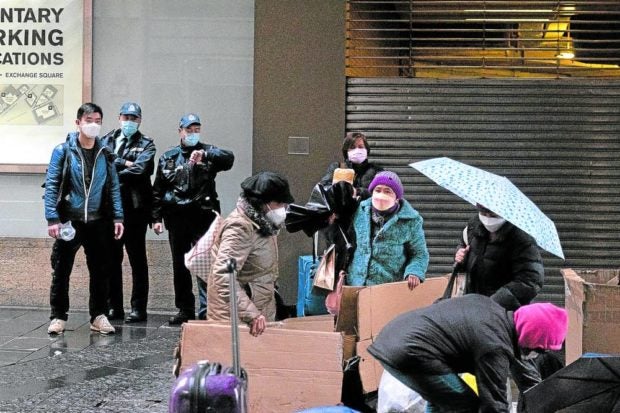 UNDER WATCH | Police officers check on foreign domestic helpers and remind them to observe distancing as they spend their rest day on Sunday at Hong Kong’s Central amid the city’s worst-ever coronavirus outbreak. (Agence France-Presse)

MANILA, Philippines — Overseas Filipino workers (OFWs) in Hong Kong who got infected in the ongoing COVID-19 surge in the Chinese special administrative region have appealed for immediate government assistance after some of them were fired by their employers.

With their employment contracts terminated and with no employment visa, a number of OFWs positive for the coronavirus were denied admission to hospitals, Dolores Balladares Pelaez of Migrante-Hong Kong said in an interview with radio station dzBB.

“The problem is really the accommodation for the terminated OFWs because the Hong Kong government does not have a designated facility for terminated and infected workers,” she said.

Pelaez said there were at least 30 to 40 OFWs who sought the group’s assistance and the displaced workers were forced to stay in parks as they had nowhere else to go.

“The situation is not quite good as positive cases continue to increase daily,” she added.

Hong Kong was set to report 7,533 new COVID-19 cases on Monday, a new record high, broadcaster TVB was quoted by Reuters as saying.

“It’s really saddening because OFWs have no houses, they just live with their employers… so once they’re terminated they stay in the parks along with their luggage,” Pelaez said.

However, the Philippine Overseas Labor Office (POLO) in Hong Kong disputed many of the reports about the plight of OFWs in Hong Kong.

It said at least two Filipino domestic helpers who contracted COVID-19 would have been fired from their jobs, but their employers were talked out of it by Philippine officials.

It added that three other domestic helpers who also tested positive for COVID-19 have returned to their work after their quarantine.

Two domestic helpers were admitted in hospitals while 31 others were in quarantine facilities waiting to be cleared to either return to work or fly back to the Philippines since their contracts have ended, Assistant Secretary for International Labor Affairs Alice Visperas said in a press briefing on Monday.

She denied reports that some OFWs were turned away by their employers and forced to sleep in the streets.

She said some OFWs were already at the airport when they received their positive test result, so they had to be rescued either by nongovernment organizations (NGOs) or by the Philippine consulate office to bring them to quarantine facilities or boarding houses.

“They may be the ones whom they say are in the streets waiting to be picked up by the ambulance,” Visperas said.

There are more than 220,000 OFWs in Hong Kong, about 90 percent of whom are domestic helpers.

Pelaez also lamented that OFWs in need of assistance were finding it hard to reach the Consulate General of the Philippines.

“Earlier this morning, there was an OFW who was asking for help. She was trying to call the hotline of the consulate, but it could not be reached,” she said.

In another instance, Pelaez said it took more than 10 hours before the consulate responded to an OFW’s call for help.

But in a separate radio interview, Consul General Raly Tejada denied that the consulate could not readily be contacted, stressing that their numbers were always available.

Tejada explained that some infected OFWs were terminated because their employers were scared of getting infected with the virus given its high transmissibility.

“They (OFWs) had to go to the hospital because they’re COVID-positive but with the high number of COVID-positives in Hong Kong now, they could not be treated immediately so they had to wait outside the hospitals. I think that’s what they were saying that they were neglected but they weren’t technically neglected. It’s just that at that time, Hong Kong authorities could not cope with the surge in cases,” he added.

Tejada also said there were only a few OFWs who got terminated after testing positive for the coronavirus.

“About three to 10 (OFWs) only. Pero hindi ibig sabihin na ipinagwawalang bahala natin ito (But that doesn’t mean that we’re taking this for granted),” he said, noting that termination is prohibited under employment laws.

He said terminated workers could file a complaint before the labor tribunal in Hong Kong.

Tejada said that while the consulate has shelters for OFWs, including those who have pending legal issues and waiting for their hearing schedules in courts, these could not be readily converted into isolation facilities.

Malacañang also said on Monday that Filipino workers in Hong Kong who tested positive for COVID-19 had received assistance from the POLO.

Acting presidential spokesperson Karlo Nograles said the POLO provided the affected Filipino workers with food, hygiene kits, and power banks so they could use their phones to communicate while waiting for calls from the Center for Health Protection and the Hong Kong labor department.

He also said the POLO has been working with an NGO to provide an isolation facility for Filipino workers.

It has also been coordinating with the Hong Kong labor department on an isolation facility for the workers awaiting admission to a quarantine facility, Nograles said, adding that transportation arrangements have also been made for them.

The POLO provided $200 for after-care financial assistance to the Filipino workers who recovered from COVID-19, while the Overseas Workers Welfare Administration would provide $200 to each worker who tested positive, he said.

In Congress, Agusan del Norte Rep. Lawrence Fortun appealed to the government to send at least one or two hospital ships to Hong Kong to provide emergency medical care for Filipinos there.

—WITH A REPORT FROM NESTOR CORRALES