Viral Facebook community Home Buddies once again proves how homes are built by more than just the material.

After having hosted multiple events and an exclusive sale to celebrate their first year last September, Home Buddies chose the Home for the Golden Gays as the beneficiary of their #HBPaskongMayPuso fundraiser. Members of Home Buddies visited the Home for the Golden Gays last December 13 to personally gift the post-dated checks for one year’s rent as well as groceries and other essentials they might need. 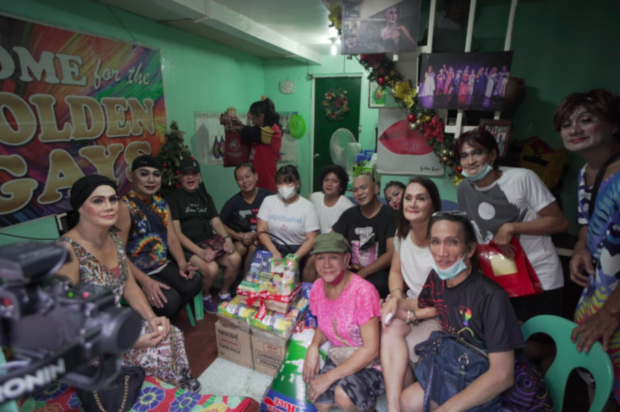 Home Buddies with members of the home for the Golden Gays

The Home for the Golden Gays is a non-profit organization founded in 1975 by LGBT rights activist and columnist Justo Justo. A safe space intended to be a care facility for elderly and homeless members of the LGBT community, the facility served as a home for many of its members for over three decades until it was forcibly closed down in 2012 after Justo’s passing.

Founder and Mayora of Home Buddies Frances Cabatuando shared how the organization was chosen to be their first beneficiary,  “We think they represent two of the most vulnerable communities in our country, the seniors and the LGBT, and we believe that our group supporting them sends a powerful message that they are not, and will not be left behind.” To raise funds for the organization, the Home Buddies Tanods (moderators) launched the sale of exclusive Home Buddies merchandise inviting members of the community to take part in their Christmas mission.

To further their efforts in spreading the #HBPaskongMayPuso initiative, a Home Buddies Paskong May Puso livestream will be held today, December 22 at 7 pm on the Home Buddies group to raise funds for the victims of recent typhoon Odette with Waves for Water PH. The program is co-presented by Samsung and is supported by Lazada, AllHome and PLDT Home. It will feature games, performances from Lola Amour and Clara Benin, Jikamarie, Leanne and Naara, Quest, and a stand-up special by Victor Anastacio and Red Ollero from Comedy Manila. The event is a chance for kapitbahays to come together to celebrate the holidays, as well as unite to help our kapitbahays in Visayas and Mindanao.

The Home Buddies #HBPaskongMayPuso initiative is the first of many more to come, as the community seeks to continue spreading the kindness and generosity common among members of the group with others outside of the community. Beyond all the DIYs and budol finds popular in the group, the #HBPaskongMayPuso initiative goes to show how for kapitbahays, kindness and compassion are the heart of every home.

To be a kapitbahay and join the Home Buddies community today, check out their official Facebook Group. You may also purchase a Home Buddies shirt to support their #HBPaskongMayPuso initative at shopee.ph/shophomebuddies.