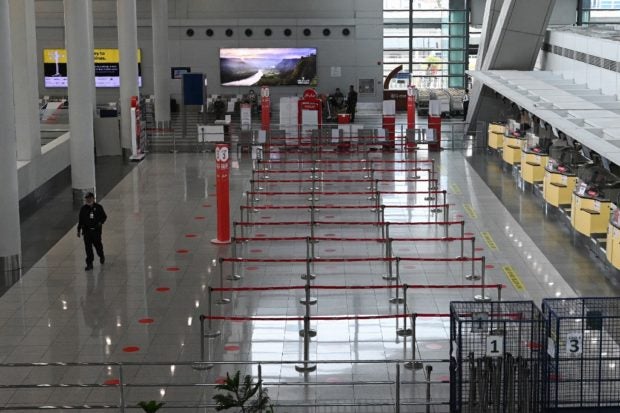 FILE PHOTO A security officer (L) walks past empty check-in counters at the airport in Manila on August 4, 2020, after all domestic flights were canceled following new restrictions to combat the COVID-19 coronavirus outbreak. (Photo by Ted ALJIBE / AFP)

MANILA, Philippines — The Inter-Agency Task Force (IATF) on Emerging Infectious Diseases has agreed not to  add more countries to the Philippines’ “red list” the meantime, Health Undersecretary Maria Rosario Vergeire said Tuesday, noting that the country cannot totally close its borders from the rest of the world.

During Teleradyo’s Sakto, Vergeire was asked if the Department of Health will recommend further expanding the travel ban amid the looming threat of the highly transmissible Omicron variant that has been detected in more countries recently.

“Unang-una, hindi ho natin pwedeng isara ang Pilipinas from the rest of the world. So, ‘yan po ‘yung prinsipyong pinanghahawakan ng Inter-Agency Task Force kaya ang ating mga eksperto nag-rekomenda na lang po ng mga protocols, stricter than before, so that at least we can ensure that we can still guard our borders kasi alam naman po natin na talagang kakalat at pupunta sa iba’t ibang bansa ang variant na ito. It is not really a matter of not having it inside our country, but when will it enter the country,” she explained.

(First, we cannot close the Philippines from the rest of the world. That is the principle that the IATF holds that is why our experts recommended stricter protocols so that at least we can ensure that we can still guard our borders because we know that Omicron will really spread.)

“It is not really a matter of not having it inside our country, but when will it enter the country,” she further said.

Vergeire said that government agencies just need to prepare, strengthen border control, as well as in the communities.

(The IATF agreed to not add more because more counties are detecting the Omicron variant. What we’ll do is to intensify our border controls.)

On Monday, Vergeire said that while government’s coronavirus response has always been to prepare for the worse and “buy time,” the entry of the Omicron variant may be inevitable and that it will only be a matter of time.

Earlier, acting IATF and presidential spokesperson Cabinet Secretary Karlo Nograles said that countries that would detect a local transmission of the Omicron variant would be included in the Philippines’ “red list“.