US stands by PH ‘in the face of escalation:’ Armed attack on PH ships triggers defense pact 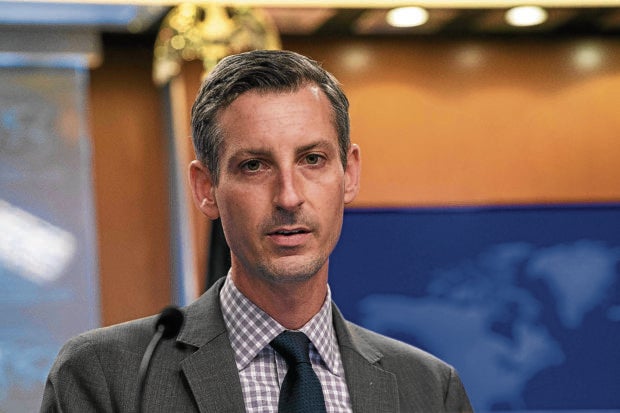 MANILA, Philippines — The United States has reaffirmed its mutual defense treaty with the Philippines as it stood by Manila after Chinese Coast Guard vessels “blocked and water cannoned” Philippine supply boats in the West Philippines Sea.

“The United States stands with our ally, the Philippines, in the face of this escalation that directly threatens regional peace and stability, escalates regional tensions, infringes upon freedom of navigation in the South China Sea as guaranteed under international law, and undermines the rules-based international order” US State Department Spokesperson Ned Price said in a statement Friday.

Price said Washington “strongly believes” that China’s action in “asserting its expansive and unlawful” claims in the South China Sea “undermine peace and security in the region.”

“The United States stands with our Philippine allies in upholding the rules-based international maritime order and reaffirms that an armed attack on Philippine public vessels in the South China Sea would invoke US mutual defense commitments under Article IV of the 1951 U.S. Philippines Mutual Defense Treaty,” he added.

Price also reminded China of the 2016 arbitral award issued by the Permanent Court of Arbitration in The Hague, which “firmly” rejected Beijing’s expansive claims in the South China sea.

“On July 12, 2016, an Arbitral Tribunal constituted under the 1982 Law of the Sea Convention delivered a unanimous and enduring decision firmly rejecting the PRC’s claims to Second Thomas Shoal and to waters determined to be part of the Philippines’ exclusive economic zone,” he said.

“The PRC (People’s Republic of China) and the Philippines, pursuant to their treaty obligations under the Law of the Sea Convention, are legally bound to comply with this decision. The PRC should not interfere with lawful Philippine activities in the Philippines’ exclusive economic zone,” the US official added.

In flagging China’s recent action, Foreign Affairs Secretary Teodoro Locsin Jr. said he spoke to Chinese ambassador Huang Xilian and the Ministry of Foreign Affairs in Beijing to protest and condemn the incident, reminding them that a public vessel is covered by the Mutual Defense Treaty between Manila and Washington.

China, for its part, said its coast guard was performing “official duties in accordance with the law” when it blocked and bombarded with water cannon Philippine boats en route to Ayungin (Second Thomas) Shoal.