After pro-China pivot, Duterte warming ties with US – defense analyst 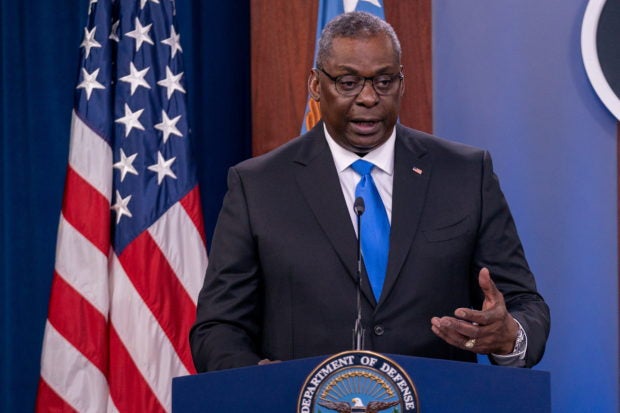 REBUILDING TRUST: A senior analyst for RAND Corporation notes howthe Duterte administration has moved in recent months to “fully reinstate security ties and rebuild trust with Washington in a vigorous attempt to deter Beijing.’’ The US think tank cited a series of high-level visits by ranking American security and military officials, like Defense Secretary Lloyd Austin III (above) who came to Manila in July. —REUTERS FILE PHOTO

MANILA, Philippines — After years of cozying up to China, President Rodrigo Duterte’s foreign policy is now pivoting back to the country’s longtime ally, the United States, according to a leading American think tank.

“Now, just as easily as he flipped one way, he’s flopping the other: His China-friendly policy is effectively over, and he’s doing his best to align the Philippines with the United States again,” Derek Grossman, a senior defense analyst at the RAND Corporation, wrote in a commentary posted on Nov. 2 on the agency’s website.

The policy think tank, funded by the US government and private endowment, offers research and analysis to the US Armed Forces.

“It would appear that Duterte’s China-friendly policy is dead, or at least on life support. While he may continue to compliment Beijing between now and when he leaves office next June, his actions are very likely to prioritize Washington,” he added.

Grossman said Duterte’s shift away from Beijing could have significant implications. “For the United States, access to Philippine military bases is vital to deterring Chinese aggression in the South China Sea, in particular, and Asia more generally. That access was threatened while Duterte flirted with China and scorned the United States; now, ties with the United States are again being reinforced,” he explained.

Grossman cited some evidence to this observation, saying that in recent months, Manila has moved to “fully reinstate security ties and rebuild trust with Washington in a vigorous attempt to deter Beijing.”

According to him, among the proofs that the Philippines and the United States have been “feverishly moving to reenergize ties” included the restoration of wide-ranging defense agreements, along with a series of high-level visits by US military leaders.

It took only a visit from US Secretary of Defense Lloyd Austin III in July for Duterte to drop his threats to scrap the Visiting Forces Agreement (VFA) ratified in 1999 that governs the presence of US troops in the country.

The President ordered the VFA’s termination in February 2020 following the cancellation of the US visa of Sen. Ronald dela Rosa, his friend and ally and a former chief of the Philippine National Police who led his administration’s centerpiece war on drugs.

Duterte thrice suspended the process of terminating the deal until he permanently ended his objections and restored the agreement when Austin visited the country.

In August, the commander of US Indo-Pacific Command, Adm. John Aquilino, visited the Philippines to reaffirm the alliance.

Marine Corps Commandant David Berger followed with a visit in September. In the same month, both Foreign Secretary Teodoro Locsin Jr. and Defense Secretary Delfin Lorenzana visited Washington to meet with their counterparts and celebrate the 70th anniversary of the establishment of the US-Philippines Mutual Defense Treaty.

Grossman also took note that the President authorized the Department of Foreign Affairs in July last year to call upon China to recognize a 2016 ruling by the Permanent Court of Arbitration in The Hague that rejected Beijing’s sweeping claims in the South China Sea.

The American analyst also noted that the United States and the Philippines have opened new avenues of cooperation in relation to pandemic response, with Washington shipping millions of vaccines to Manila. In August, Duterte publicly thanked the United States for its vaccines and said the donations were a key factor in his decision to drop the VFA termination, he noted.

In a televised address on Oct. 1, Duterte thanked the US government for sending another five million doses of COVID-19 vaccines.

“Ang bait ng America. Baka pupunta ako doon (America is so generous. I might go there) just to thank the American government and the people,” Duterte said, a total opposite to his previous pronouncements where he vowed never to set foot in the United States.

Grossman recalled that when Duterte took office in 2016, he pledged to shift his country’s foreign policy in favor of China and Russia.

“But consistency and principle were never Duterte’s strong suits,” he said, stressing that the Philippine leader’s change of heart could possibly be because he “feels a bit jilted.”

“His warm embrace of China never produced the results he expected,” said Grossman, who cited several incidents that “tremendously complicated” Duterte’s China-friendly approach and made outreach to Washington “more appealing.”

For instance, he said, Duterte had hoped that he would be able to strike a deal on joint exploration of disputed regions in the West Philippine Sea (WPS) and leverage Beijing’s massive infrastructure and investment plan, the Belt and Road Initiative, to support his own “Build, Build, Build” infrastructure plan.

To make matters worse, Beijing has also amped up its assertiveness in the South China Sea, Grossman added, referring to China’s incessant deployment of its maritime and fishing vessels in the Philippines’ exclusive economic zones in the WPS.

Duterte previously downplayed China’s aggressive behavior in the WPS apparently in exchange for massive investments and loans, which have yet to materialize barely a year left in his term.

“[N]one of those dreams has come to fruition,” Grossman said.