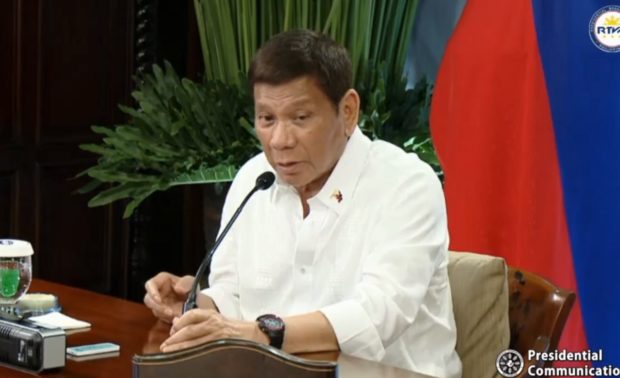 MANILA, Philippines — The newly formed trilateral security partnership among Australia, the United Kingdom, and the United States, should not get in the way of the cooperation between America and the Association of Southeast Asian Nations (Asean), President Rodrigo Duterte said on Wednesday.

The president virtually attended the 9th Asean-US Summit, where he reaffirmed the Philippines’ stance on the strategic importance of a peaceful and stable South China Sea.

“All stakeholders must exercise self-restraint to avoid untoward incidents that may further complicate the situation,” he said.

He also said countries must “work together toward the peaceful resolution of disputes, in accordance with international law,” particularly the 1982 United Nations Convention on the Law of the Sea (Unclos), and raised the need for sustained political dialogue, economic engagement, and sociocultural ties to strengthen the Asean-US partnership.

Citing the changing “regional landscape and seascape,” he underscored the importance of and need for Asean’s centrality and acknowledged Washington’s commitment to work with it, especially concerning maritime security and domain awareness.

At the plenary summit with fellow Asean leaders on Tuesday, Duterte said in a speech that with new multilateral arrangements arising in the region, the bloc had “to be wary of developments that may derogate the primacy of Asean and Asean-led mechanisms.”

“Asean must remain at the center of the evolving regional architecture, but we have to earn this by exercising real leadership and delivering results,” he said.

The president said the South China Sea would present a “continuing strategic challenge” to Asean for the next decades. Thus, he said, it was “vital” that all members push for “peace, stability and prosperity” and respect Unclos and the Arbitral Award won by Manila in 2016.

“We have come a long way in keeping the peace and promoting prosperity in our region. We must not allow those with [diverging] interests to make our efforts fail,” he said.

Duterte also spoke about a six-month stalemate among Asean members regarding the Asean Outlook on the Indo-Pacific (AOIP). He said that of the points agreed upon, only humanitarian assistance has had “tangible progress.”

“It would be difficult to hold external partners accountable to the principles of the AOIP, when Asean itself does not and cannot observe them consistently,” he said without elaborating.

Duterte announced that the Philippines was the new country-coordinator for Asean-EU Dialogue Relations, and that the European bloc was among the parties and countries seeking dialogue partnerships and deeper engagement with Asean.

He welcomed US President Joe Biden to the lattter’s first participation in the Asean-US Summit, underscoring the longstanding relations between the bloc and Washington.

Touching on the global fight against COVID-19, he expressed appreciation for the US vaccine donations to the region, including the Philippines.

To defeat the pandemic, he said, bilateral, regional, and international cooperation must be strengthened to ensure universal access to vaccines and medicines.

On Myanmar, the president said the lack of progress in engaging the military junta and various sectors had “put Asean’s credibility into question.”

“How we respond collectively will either affirm Asean’s relevance or reveal our impotence. It is up to us to prove that Asean is not just a ‘talk shop,’” he said.

He expressed concern that the situation in Myanmar “may further exacerbate the effects of the pandemic.”

Duterte also said Asean “must stand with Myanmar in resolving issues peacefully and in a manner that prioritizes the welfare of its people.” He called on all parties in Myanmar to engage in “constructive dialogue” with Asean.

“We are, after all, an Asean family. And if [we] cannot trust each other and [work] together, then who can Myanmar trust and work with?” he said, adding:

“We need to listen to all sides so we can effectively assist Myanmar in pursuing enduring peace and stability. As we have shown in the past, a consultative approach [with] Myanmar allows for inroads to be made in democratization.”

The president reiterated that Asean’s special envoy must be able to visit Myanmar soon and meet with all parties. He urged everyone to ensure that humanitarian aid would reach those in need, especially during the pandemic.

“I am concerned that Myanmar’s rejection of our sincere [offers] of assistance may undermine the trust and confidence we have in each other, as well as that of key external partners and international organizations,” he said.