When Bongbong met Xilian: Strengthening and deepening ties with China 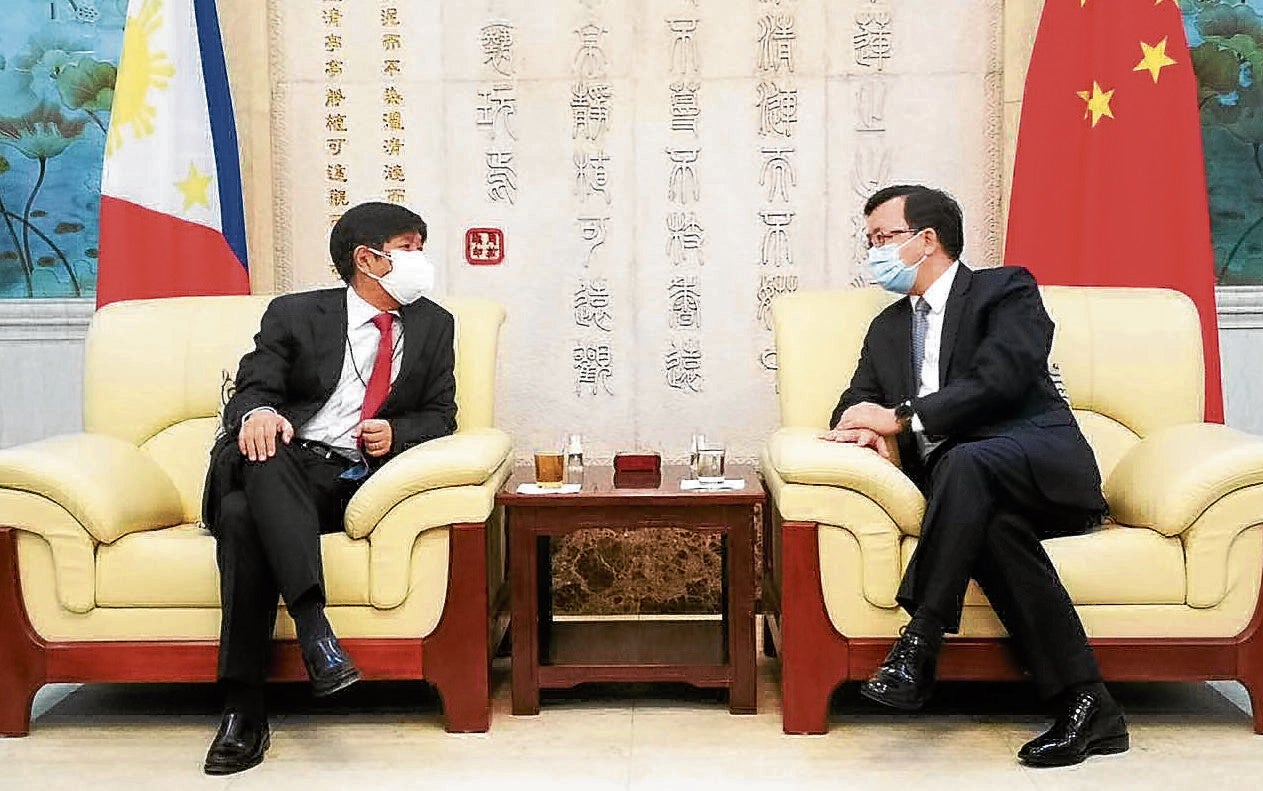 MANILA, Philippines — There was no talk of his 2022 presidential bid when Ferdinand “Bongbong” Marcos Jr. met with Chinese Ambassador to the Philippines Huang Xilian on Wednesday for a ribbon-cutting ceremony at the Chinese Embassy in Makati City, said lawyer Victor Rodriguez.

“It was just that—a ribbon-cutting,” Marcos’ chief of staff said in a Viber message, explaining that the envoy “requested” the former senator “to cut the ribbon for his new exhibit.”

Huang said it was a “great honor” to meet the presidential aspirant and his family. Marcos was accompanied by his wife, Louise, and son Joseph Simon, and House Majority Leader Martin Romualdez.

Marcos and Huang also met earlier this year at the Chinese Embassy.

According to Huang, the new photo wall displays records of historic moments of China-Philippines relations, including a photo of then Chinese Premier Zhou Enlai and former President Ferdinand Marcos signing the Joint Communique on the Establishment of Diplomatic Relations between the Philippines and China on June 9, 1975.

“While [we] always cherish and honor old friends, we hope that more and more people from our two countries will be committed to deepening our partnership and cooperation, so as to bring more benefits to our two peoples and pass on our traditional friendship from generation to generation,” he said.

“Together, we are opening up a brighter future!” he added.

In a text message to reporters, Romualdez said Marcos and Huang discussed “strengthening and deepening ties with China,” adding that the photos displayed were “pictures commemorating the opening and developing of relations between the two countries.”

The former senator has in the past expressed agreement with President Rodrigo Duterte’s policy on the West Philippine Sea, saying that “although it is criticized, it is the right way to go.”

He echoed Duterte’s line that the Philippines could not afford to go to war with China.

Since he assumed office in 2016, Duterte has set aside the July 2016 Hague ruling that invalidated Beijing’s sweeping claims in the South China Sea and instead forged warmer ties with the Asian superpower in exchange for loans and other economic perks.

Former Foreign Secretary Albert del Rosario earlier bared that Chinese officials had bragged about their influence in the 2016 presidential elections where Duterte won with 16 million votes.

But Duterte denied that China had helped him win the presidency.

Read Next
Experts declare ‘code red’ for public health ahead of UN climate talks
EDITORS' PICK
Omicron variant detected in more countries as scientists race to find answers
Gov’t plans to open COVID-19 vaccination for 5- to 11-yr-olds by January 2022
A delightful blessing!
Villar Group gears up for AllValue Shopping Party on Dec. 3; around P 1-million promos and discounts up for grabs
Legarda: Ending Violence Against Women, a cause for all
Gov’t eyeing COVID-19 vaccine booster for essential workers, indigents by Dec. 10
MOST READ
Omicron poses ‘very high’ global risk, countries must prepare–WHO
Quiboloy warns of ‘much worse than Omicron virus’ if his ‘persecution’ is not stopped
Bongbong Marcos’ conviction in tax case not a crime involving moral turpitude — lawyer
Marcoleta defends pol ads on ABS-CBN
Don't miss out on the latest news and information.