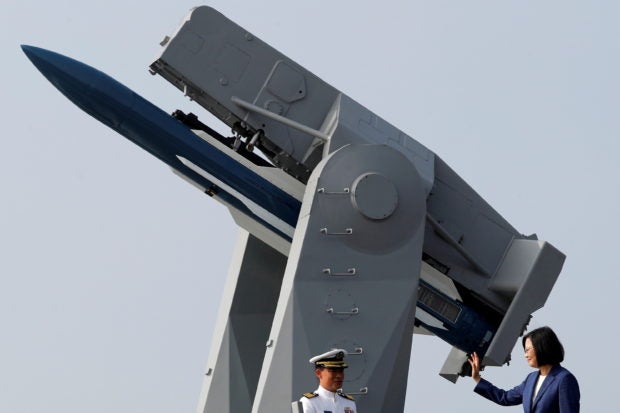 TAIPEI — A total of 39 Chinese air force aircraft entered Taiwan’s air defense zone on Saturday, the defense ministry in Taipei said, setting a new high for missions which have infuriated the island’s government and further raised tensions with Beijing.

Taiwan, a democratically governed island that is claimed by China, has complained for over a year of repeated missions near it by China’s air force, often in the southwestern part of its air defense zone close to the Taiwan-controlled Pratas Islands.

Taiwanese fighters scrambled against the 39 Chinese aircraft in two waves on Saturday, the Taiwan Defense Ministry said. It said Taiwan sent combat aircraft to warn away the Chinese aircraft, while missile systems were deployed to monitor them.

That was one more aircraft than on Friday, the day China marked its national day, which was at the time more planes than the country had ever sent before to harry Taiwan’s air defense zone.

Taiwan’s Defense Ministry said that on Saturday the Chinese aircraft first came during the day – 20 aircraft – followed on Saturday night by a further 19. Most of the aircraft were J-16 and Su-30 fighters, it added.

The aircraft on both missions flew near the Pratas, the ministry said, in separate statements late Saturday and early Sunday morning.

Taiwan Premier Su Tseng-chang condemned China for its actions on Saturday, saying the country was engaging in military aggression and damaging regional peace.

It has previously said such flights were to protect the country’s sovereignty and aimed against “collusion” between Taiwan and the United States, the island’s most important international backer.

Taiwan marks its national day next Sunday, with a major speech by President Tsai Ing-wen and military parade in central Taipei, which will include a fly-by of fighter jets.

China has stepped up military and political pressure to try to force Taiwan to accept Chinese sovereignty.

Taiwan says it is an independent country and will defend its freedom and democracy.