MANILA, Philippines — No nation can diminish the importance of the 2016 arbitral award on the South China Sea amid disputes in the area, President Rodrigo Duterte said on Wednesday.

Speaking virtually before the 76th United Nations General Assembly, Duterte invoked the 2016 arbitral award of the South China Sea  as well as the 1982 United Nations Convention on the Law of the Sea (Unclos).

“The award must be seen for what it is — a benefit across the board to all who subscribe to the majesty of the law. No amount of willful disregard by any country — however big and powerful — can diminish the arbitral award’s importance,” Duterte said.

“The Philippines is one with the ASEAN and other stakeholders in ensuring that the South China Sea remains a sea of peace, security, and prosperity. The 1982 Unclos and the 2016 arbitral award of the South China Sea provide a clear path towards a just, fair, and win-win solution for all,” Duterte added. 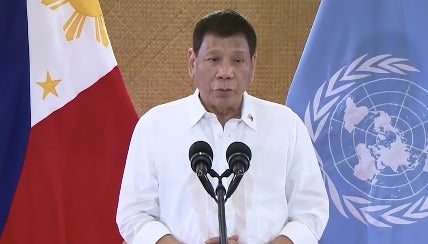 In 2016, the Permanent Court of Arbitration ruled that the Philippines has sovereign rights over the West Philippine Sea, saying China’s nine-dash line has no legal basis.

Duterte earlier said that the ruling is just a “piece of paper” that can be disposed of in a wastebasket.

Why do China, Duterte descriptions of arbitral ruling look the same?