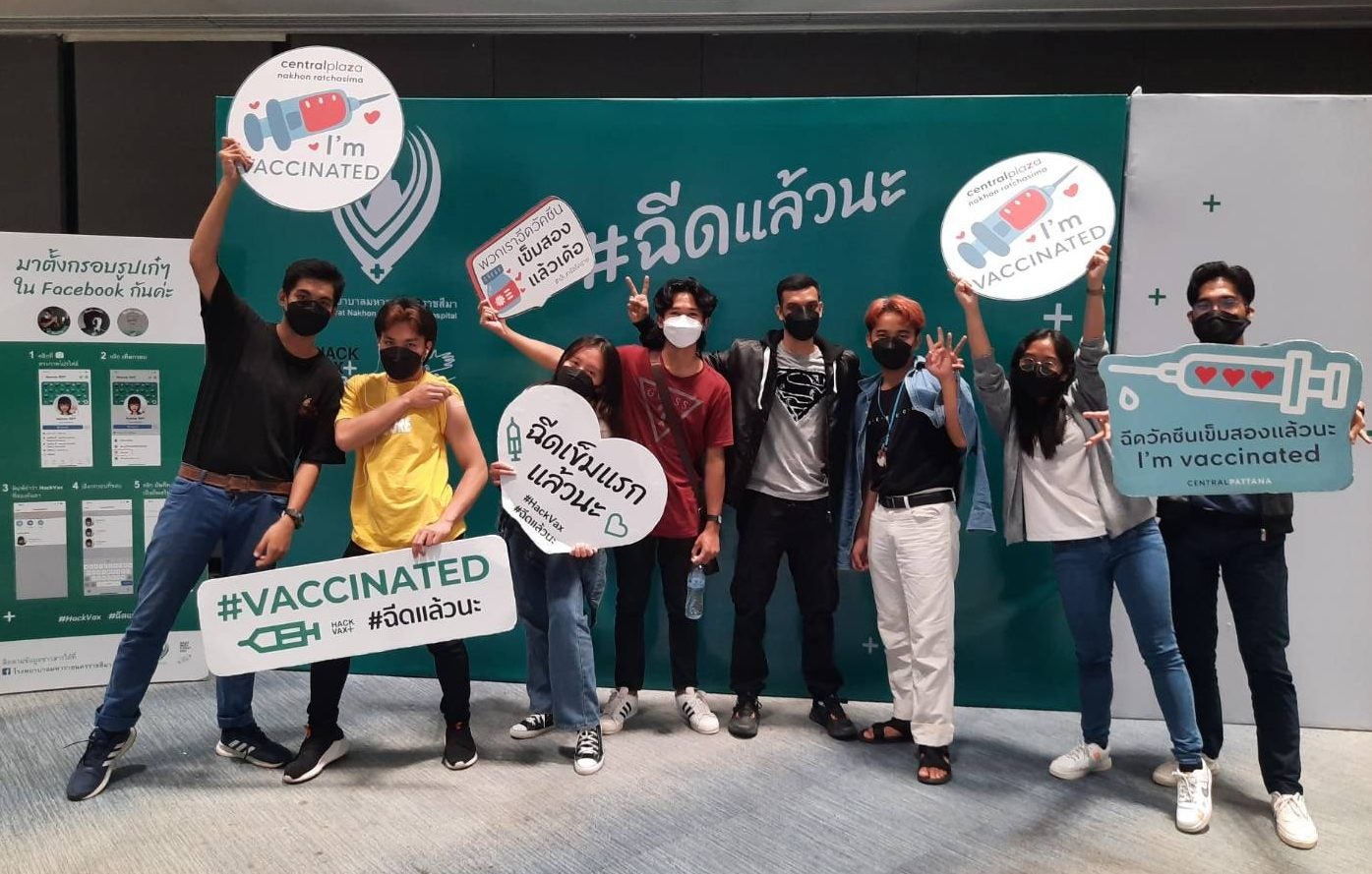 On Sept. 14, 2021, Angelo Fernandez Virgo, a Filipino engineering student, and other international students from different universities in Nakhon Ratchasima were among the thousands of foreigners and Thai citizens who queued at Central Plaza mall to receive vaccines for SARS Cov2, the virus that causes COVID-19.

Virgo is one of seven Filipino students under the Royal Scholarship for Sut International Engineering Program starting in 2021.

They were eagerly waiting for their queue number to be called. Virgo’s was 6020. By 3:00 pm, his number was called. On that day, an estimated 12,000 people were vaccinated at only one site—Central Plaza. The campaign grew popular with the hashtag #HackvaxKorat.

“I thought we were the least priority. I never expected that we would be given priority too. We weren’t expecting Pfizer,” Virgo said.

On Aug. 1, 2021, Virgo registered at the Ministry of Foreign Affairs’ https://expatvac.consular.go.th  posted by the Center of International Affairs (CIA SUT).

The province of Nakhon Ratchasima, 262 kilometers northeast of Bangkok, one of the big four provinces in Thailand, is still in maximum and strict control along with 28 other provinces plus  Bangkok, because of a large number of COVID-19 cases.

The slow vaccination rollout in Thailand has been criticized due to the delay in the campaign.

Last June, Ajong Ng, a lecturer at Stamford University in Bangkok, received his first dose and a second on Sept. 3. Both Astra Zeneca. It was facilitated by the Ministry of Higher Education Research Institute. 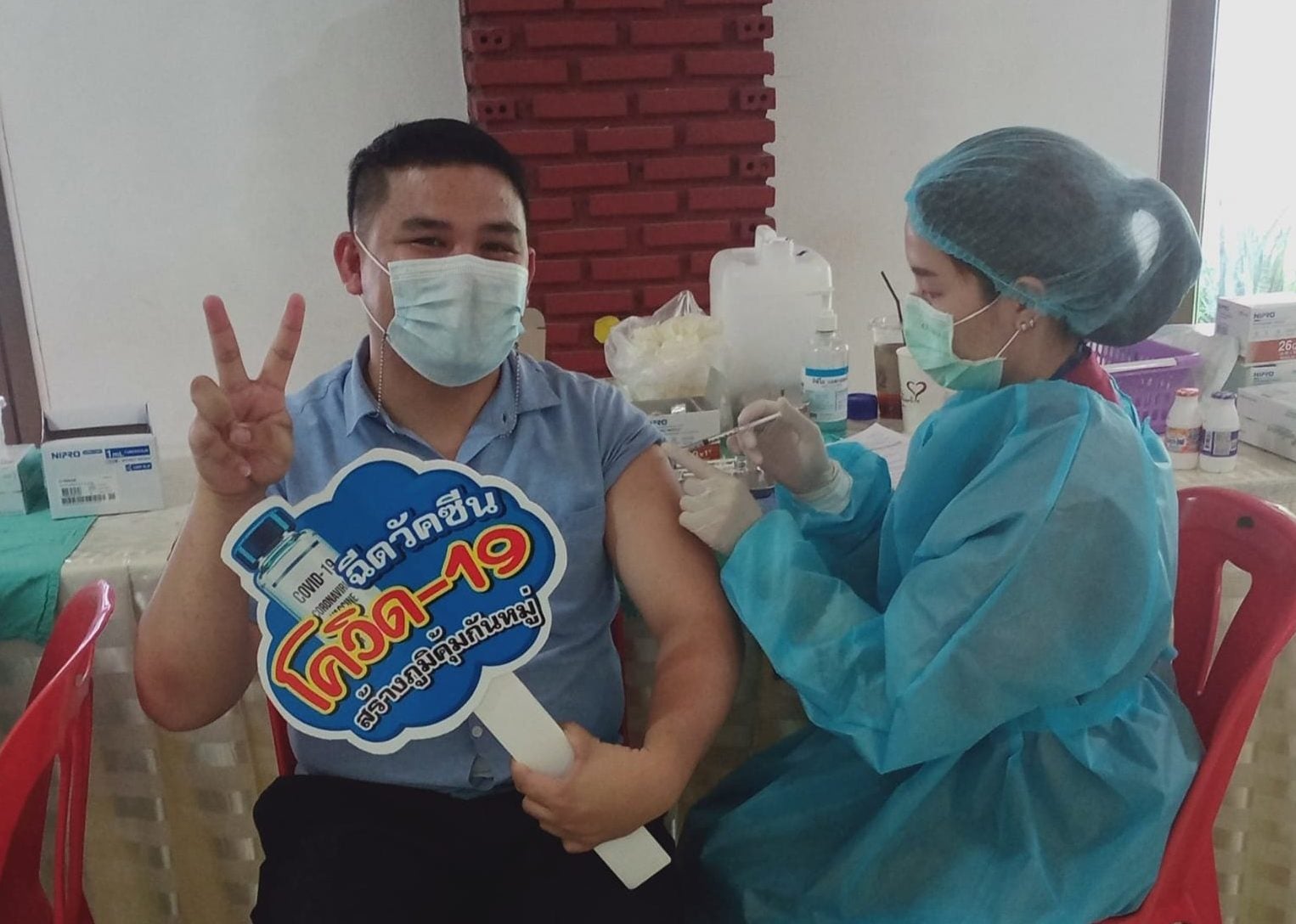 Some companies provided vaccines for their foreign employees. But others had to get a schedule from hospitals or register at websites provided by the government.

With an estimated population of 70 million, excluding foreigners, more than 42. 3 million doses had been administered, according to reports last Sept. 17.

Amber Carandang, a Filipino teacher in Korat, said that her school facilitated vaccination for school staff. She received Sinovac and Astra Zeneca. She did not experience any side effects.

“They give Astra for 50 years above. Some of my colleagues who are below 40 experienced chills and fever. So they reported it to the hospital,” Carandang said.

On the WHO’s website, vaccine combination is not recommended yet because of insufficient data. However, some countries in the European Union and Britain are already conducting trials on the efficacy of mixed vaccines.

Earlier, Thailand had purchased Sinovac and Sinopharm. The United States donated 1.5 million Pfizer vaccines to Thailand in July, while Japan donated 1.03 million AstraZeneca also in July. Japan will donate another 300,000 doses this month.

Siam Bioscience, the local producer of AstraZeneca, supplied 26 million doses from June to August, while another 35 million will follow from September to December.

In November 2020, the World Health Organization (WHO) hailed Thailand for its effort in containing COVID-19 even without a vaccine.

Earlier in July, Thailand recorded “zero cases” or no local transmission. Thailand was on its way to the “new normal”.

Classes had resumed. Malls opened. The tourism industry, although catering to local tourists only, were bouncing back. However, it was short-lived. In December, cases were recorded in Chiang Rai at the Thai-Myanmar Border, but contained shortly.

It had a domino effect.

On Dec. 11, a wholesale shrimp vendor in Talad Klang Kung, the central shrimp market in Samut Sakhon, tested positive for SARS Cov2. Samut Sakhon is a coastal town in the Gulf of Thailand and is only 37.5 kilometers from Bangkok.

In April, Thailand was hit by the third wave. Clusters of infection were recorded in Bangkok steaming from bars, construction camps and wet markets. Local transmissions have been recorded every day since April.

On Aug. 13, Thailand may have reached the peak at 23, 418 cases in a day. To date, the country already reached 1.4 million cases, with 1.2 million recoveries and 14,953 deaths. The daily rate of infection is more than 10,000 in the past months but decreasing according to the Ministry of Health.

Until the end of September, restrictions were imposed in 29 provinces categorized as the dark red zone. There are three zonings: maximum and controlled areas (dark red) where curfew is imposed from 9:00 pm to 4:00 am. Business operations and travels are limited; no public gathering of 50 people and a 75 percent seating capacity for open-air restaurants.

In the maximum controlled area (red zone) and controlled area (orange zone), there are no travel restrictions, restaurants can remain open until 11 p.m., businesses are open but social distancing and other precautionary measures are imposed. No alcoholic beverages can be served in the restaurants.

Boosting for the re-opening

In Thailand’s bid to reopen by mid-October, the government already approved a booster shot in September. In Nakhon Ratchasima, those who received Pfizer as booster shots are nursing students and medical front liners.

It is expected that tourist spots, including business hubs, have vaccinated 70 percent of its population by the reopening on Oct. 15.

Educational institutions are also set to open in November. In dark red zones, 85 percent of the staff must have been vaccinated before they are allowed to open. Children aged 12-18 years old will receive their first dose starting Oct. 4. Pfizer is the only approved vaccine for children. An estimated 4 million students will receive their first dose.

Measures were taken to ensure safety. The Thai government endorsed the use of Mor Chana and Thai Chana Apps that developed a COVID QR code which is scanned on a phone to track the time of entrance and exit in a public venue, like shops, restaurants and bus stations.

Manual recording is also done if one chooses not to use the apps. Temperature checks and hand sanitizers are in place. People wear masks everywhere.