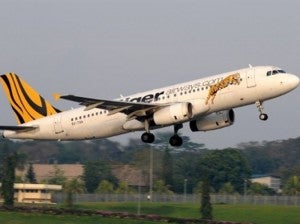 Tiger Airways takes off at the Changi International Airport in Singapore. AFP

MANILA, Philippines— The Philippine Civil Aeronautics Board has ordered Singapore-based low-cost airline Tiger Airways to stop selling seats on its website for flights between Manila and two domestic routes for its local partner South East Asian Airlines, or SEAIR.

Tiger Airways had been selling SEAIR flights for July between Manila and central Cebu City, and Manila and southern Davao City through its website.

Hearings on those consolidated cases were completed in April. Arcilla said pending the board’s decision, Tiger started offering the Manila-Cebu and Manila-Davao seats on April 19, eliciting a new flurry of complaints from local airlines.

SEAIR President Avelino Zapanta said it has complied with the board’s order but believes its deal with Tiger Airways is legal.