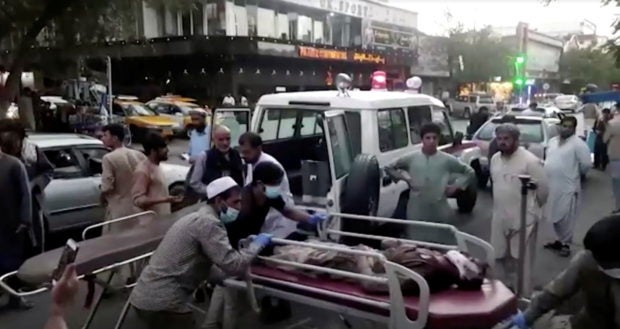 A screen grab shows people carrying an injured person to a hospital after an attack at Kabul airport, in Kabul, Afghanistan August 26, 2021. (REUTERS)

MANILA, Philippines — No Filipino casualty has so far been reported in the bombings near Kabul’s airport in Afghanistan, the Department of Foreign Affairs (DFA) said.

“Preliminary information from Philippine Ambassador Daniel Espiritu, who is based in Islamabad, Pakistan, indicates that there were no Filipino casualties at the suicide bombings at Kabul airport yesterday,” the DFA told reporters on Friday.

The Pentagon recently reported at least two explosions near Kabul’s airport in the wake of a massive evacuation effort from Afghanistan after the Taliban took over the country’s capital.

Islamic State Khorasan (ISIS-K), an affiliate of militants who previously battled U.S. forces in Syria and Iraq, claimed responsibility for the attack, saying one of its suicide bombers had targeted “translators and collaborators with the American army.”

The DFA is currently undertaking evacuation efforts to get Filipinos out of Afghanistan.

So far, 185 Filipinos were able to flee or have been evacuated from the troubled nation.