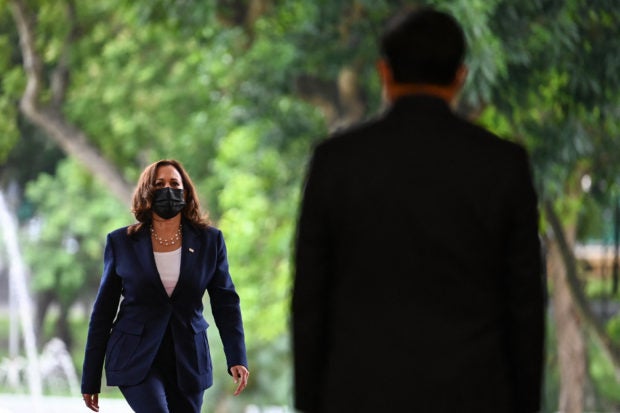 HANOI — Vice President Kamala Harris began a visit to Vietnam Wednesday to stress US commitment to Asia, a trip critics have slammed as tone-deaf given the parallels with the superpower’s evacuations from Saigon and Kabul.

Harris will meet the communist state’s president and prime minister in Hanoi, a day after accusing regional giant Beijing of intimidation in the disputed South China Sea.

Her arrival was delayed due to what US officials called an “anomalous health incident” in Hanoi, an apparent reference to the so-called “Havana syndrome” which has afflicted US diplomats in several countries including China and Russia.

It is not clear what causes the syndrome and it has led to unproven allegations that Russians or others used sonic or other high-intensity electronic devices to physically harm US diplomats.

The visit, the first to Vietnam by a sitting US vice president, comes after a two-day stop in Singapore, where Harris took aim at China and sought to shore up US credibility in the wake of the Taliban’s stunning return to power.

But the Vietnam leg of the Asian tour has sparked criticism after the chaotic evacuation of Kabul prompted comparisons with the trauma of 1975 Saigon, when US helicopters ferried final evacuees from the embassy roof in the last days of the Vietnam War.

Harris is steering clear of Saigon — now named Ho Chi Minh City — and on Wednesday she will seek to shift the focus from the historical parallels and emphasize Washington’s commitment to Southeast Asia as it opens a regional branch of the US Centers for Disease Control (CDC) in Hanoi.

Harris used a speech in Singapore to say Beijing “continues to coerce, to intimidate” and to make unreasonable claims to large areas of the South China Sea.

China claims almost all of the resource-rich South China Sea, through which trillions of dollars in shipping trade passes annually, with competing claims from four Southeast Asian states including Vietnam.

Beijing has been accused of deploying military hardware including anti-ship and surface-to-air missiles there, and ignored a 2016 international tribunal decision that rejected its historical claim over most of the waters.

“Beijing’s actions continue to undermine the rules-based order and threaten the sovereignty of nations,” she said.

China hit back at Harris, saying the Afghan debacle was an example of “selfish” US foreign policy and accusing Washington of “bullying”.

Harris is the latest top official from President Joe Biden’s team to visit the region as Washington seeks to reassure allies of its steadfastness.

But events in Afghanistan have cast doubts on US claims of reliability.

“The US has recommitted itself now to this region but if something happens in Afghanistan again, for example if terrorism comes back…  will the US continue to focus here?” he told AFP.

The US-China relationship has deteriorated over a range of issues from cybersecurity and tech supremacy to human rights in Hong Kong and Xinjiang.

But in Singapore, Harris sought to allay fears that growing tensions could force countries that have strong ties with both of the world’s top economies to choose sides.

Vietnam has sought to forge its own path between the two superpowers and on Tuesday Prime Minister Pham Minh Chinh met the Chinese ambassador and stressed Hanoi would not “align with one country against another”.