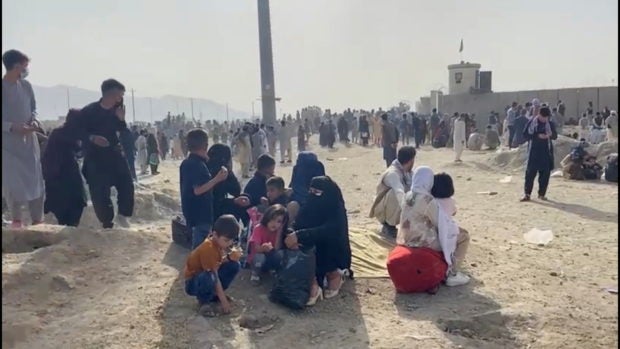 People gathered outside the airport react to gunfire, in Kabul, Afghanistan August 18, 2021 in this still image taken from video. ASVAKA NEWS via REUTERS

MANILA, Philippines — Twelve more Filipinos have been evacuated from Afghanistan by their employers, the Department of Foreign Affairs (DFA) said Thursday as it reported two “unsuccessful” attempts to evacuate Filipinos from the troubled nation.

“Last night, two attempts were made to evacuate Filipinos via New Delhi and Islamabad. However, these were unsuccessful due to the cancellation of all commercial flights,” the DFA said in a statement.

“As experienced by the groups last night, access to and even within the airport is very difficult, and if able to check-in, this is still no assurance that a flight would be able to leave,” it added.

The DFA, however, assured it is “exhausting all avenues” to ensure the safety and eventual evacuation of the remaining Filipinos there.

According to the DFA, there are 90 Filipinos still in Afghanistan, 79 of whom have already requested repatriation from the government.

Meanwhile, some Filipinos have been able to leave through the help of their foreign employers, the DFA added.

“Yesterday there was a confirmed 7 Filipinos who evacuated to Qatar, and another 5 to the U.K. There are reports of other Filipinos who have left Kabul which our embassies are verifying,” it said. “In all cases, the DFA will assist in their return to the Philippines.”

On Tuesday, 35 other Filipinos, who were evacuated from Afghanistan by their respective employers, arrived in the Philippines.

The DFA advised remaining Filipinos in Afghanistan to be ready to leave “at a moment’s notice.”

“Filipinos still remaining in Afghanistan are further advised to be prepared to leave at a moment’s notice, and to be able to travel with minimal luggage,” the department said.

Earlier this week, the DFA raised Alert Level 4 (mandatory repatriation/evacuation) in said country due to the “worsening security situation” there.