Self-defense a must for Filipinos in NYC 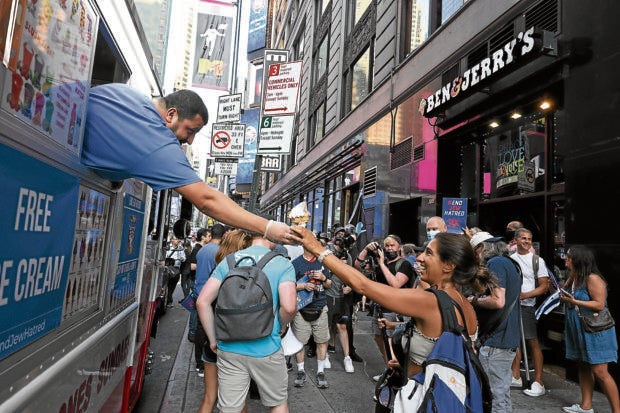 A vendor hands out free ice cream during a protest against Ben & Jerry’s Ice Cream at their Manhattan store on Aug. 12, 2021 in New York City. Jewish organizations have railed against the company’s decision to stop selling its products in the West Bank and eastern Jerusalem, which it calls occupied territories. The company said in a statement that continued sales there “is inconsistent with our values.” Michael M. Santiago/Getty Images/AFP

“Just when we thought that race-based violence inflicted on our ‘kababayan’ here in New York had died down, two more incidents in the past week again underscored the need for members of the Filipino community to remain vigilant,” Consul General Elmer Cato said.

“The number of … incidents involving [our] kababayan in the New York area since the start of the year should be almost 20 by now,” he told the Inquirer.

“As a result of the latest incidents, we are lining up more self-defense training workshops for [our] kababayan,” Cato said.

In May, the Consulate and Philippine Community Center Foundation of New Jersey Inc. held a free workshop for adults and senior citizens.

According to Cato, the latest victims were Filipinos Potri Ranka Manis, a nurse and founder of the dance theater company Kinding Sindaw, and stage actor Miguel Braganza.

Manis suffered injuries after she was attacked by two individuals who told her to mind her own business after she offered them masks on board the E train in Manhattan. She said her assailants had hurled racial slurs while attacking her.

“I just got beaten up, I just got assaulted because I’m trying to help this city of New York to prevent the spread of this new variant,” Manis said in a video she posted on Facebook.

Appeal to De Blasio “This is a public health issue and I’m calling on Mayor [Bill de] Blasio to address this. Violence against Asians, violence because of COVID-19 precaution confusion, is another virus that attacks the New York City community now, particularly Asians and Muslims like me,” she added.

On Aug. 7, Braganza was struck with a gun in the forehead in what the police said was a failed robbery attempt with possible racist undertones after one of the suspects hurled anti-Asian insults against him, the consulate said.

The incidents were the latest in a series of racist attacks on Asians that intensified soon after the COVID-19 pandemic hit the United States.

Cato called on authorities to take the necessary action and make sure that those behind the attacks were arrested and brought to court.

“We hope that those behind the recent anti-Asian incidents against two leaders of the Filipino American Community in New York are identified, arrested and brought to court,” he said, adding that the consulate was following up both cases with the police.