Singapore to contribute $100,000 to Asean efforts to aid Myanmar 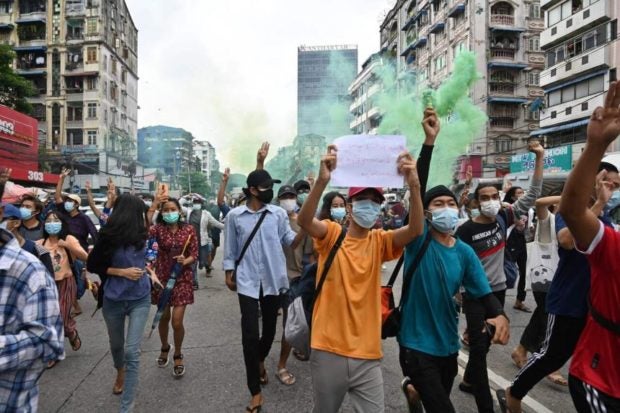 Political violence has not ceased in Myanmar despite Asean’s consensus. AFP FILE PHOTO

BANGKOK — Singapore will contribute US$100,000 (S$135,000) to Asean’s humanitarian assistance unit as it begins preparations to provide aid to Myanmar, Singapore’s Foreign Minister Vivian Balakrishnan said on Monday (Aug 2) after meeting his counterparts from the region.

“We discussed the situation in Myanmar, which remains of grave concern,” he wrote on Facebook after the virtual Asean Foreign Ministers’ Meeting. “We urged the swift and effective implementation of the Five-Point Consensus agreed at the Asean Leaders’ Meeting on 24 April 2021.”

He added that Asean needed to harness its Covid-19 response fund to buy vaccines for its people.

By Monday evening though, there was still no word on who had been picked as Asean’s special envoy to help facilitate dialogue among Myanmar’s political stakeholders. This had been a key feature of the consensus to tackle the crisis triggered by Myanmar’s Feb 1 military coup.

According to a transcript of remarks given to the media, Indonesian Foreign Minister Retno Marsudi had urged Myanmar to immediately approve Asean’s proposal on the special envoy.

While she did not reveal the name of the envoy proposed, she stressed at the meeting that the envoy should be able to start work immediately, and be guaranteed access to the relevant parties within Myanmar.

She also said that if the meeting failed to result in any concrete steps to take the consensus forward, Indonesia would propose the matter be put before Asean leaders again for further action.

The other points in the consensus calls for the immediate cessation of violence, constructive dialogue among all concerned, for the special envoy to visit Myanmar to meet all stakeholders, and for Asean to provide humanitarian assistance.

Asean’s foreign ministers will also hold virtual meetings with their counterparts across the world until Friday.

The choice of envoy has been a contentious issue. While Asean has not officially recognized the junta as the government of Myanmar, its representatives have represented the country in Asean meetings. Without the junta’s nod, the envoy would unlikely be able to enter the country.

Gen Min Aung Hlaing claims Myanmar’s election in November last year was fraudulent and has vowed to hold fresh elections and build a “discipline-flourishing democracy”. On Sunday, the junta renamed itself as the “caretaker government”, with the general as “prime minister”.

Political violence has not ceased in Myanmar despite Asean’s consensus. The Assistance Association for Political Prisoners has said at least 940 people have been killed by the junta since coup.

In northern Kani township where locals have put up a strong resistance to the junta, several bodies bearing signs of torture were uncovered last week, reported Myanmar Now media outlet.

A raging Covid-19 pandemic in Myanmar has also left growing numbers gasping for air in their homes. With the understaffed hospitals full, the junta has tried to restrict the sale of oxygen to the private sector. It has not let up its persecution of medics deemed to be resisting the regime and has also confiscated their equipment.

The National Unity Government (NUG), formed by ousted lawmakers and their allies, says it is working with over 700 doctors and nurses to provide medical consultation. It is also giving oxygen supplies and body bags to households, said NUG’s foreign minister Zin Mar Aung in an online discussion organised by the Asia News Network on Monday.

Asked if the NUG would work with the junta to combat Covid-19, Ms Zin Mar Aung said the political conditions made that impossible. But NUG is willing to work with a third party to deliver urgent medical aid to Myanmar people.

“We are willing to cooperate and engage with the world as well as Asean countries,” she said.