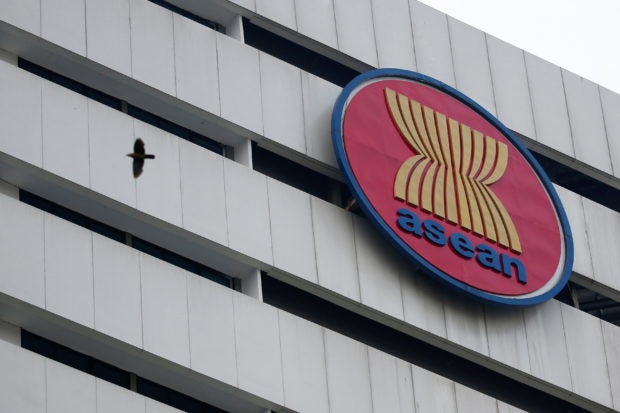 A bird flies near the Association of Southeast Asian Nations (ASEAN) secretariat building, ahead of the ASEAN leaders’ meeting in Jakarta, Indonesia, April 23, 2021. REUTERS FILE PHOTO

WASHINGTON — The plan by Myanmar’s ruling generals to hold elections in two years shows they are stalling for time and the need for Southeast Asian countries to step up pressure on them, a senior State Department official said on Monday.

“It’s clear that the Burmese junta is just stalling for time and wants to keep prolonging the calendar to its own advantage,” the official told reporters ahead of a ministerial meeting this week between the United States and the 10-member Association of Southeast Asian Nations, which includes Myanmar.

“So, all the more reason why Asean has to engage on this and… uphold the terms of the five point consensus that Myanmar also signed up to,” he said referring to a plan by Asean leaders to tackle the turmoil.

The official briefing reporters ahead of a week of virtual meetings involving U.S. Secretary of State Antony Blinken and regional counterparts said Washington had proposed expanding engagement with Asean to include five new “multi-ministerial”-level dialogues, which it hoped the bloc would agree to soon.

The official said one of the areas was climate, but did not list the others.

He said he expected Blinken to provide details to Asean ministers of continued U.S support for Southeast Asia in the fight against COVID-19, which has hit the region hard.

Blinken would also raise what Washington sees as China’s human rights abuses in Xinjiang, Hong Kong and Tibet, he said.

Asked about China’s warnings that if Washington expected cooperation on issues such as climate, it would need to de-escalate tensions, the official replied:

“Look, if we can’t force China to cooperate, we can continue to point out the advantages, and hopefully they’ll see that this is also in their advantage to work with us on climate issues.”

Washington is seeking to show through Blinken’s participation in five consecutive days of regional meetings that the Biden administration is serious about engaging with allies and partners in its bid to push back against China’s growing influence.

As well as the U.S.-Asean ministerial talks, Blinken will also participate virtually this week in ministerial meetings of the East Asia Summit, the Asean Regional Forum (ARF), the Mekong-U.S. Partnership and the Friends of the Mekong initiative.