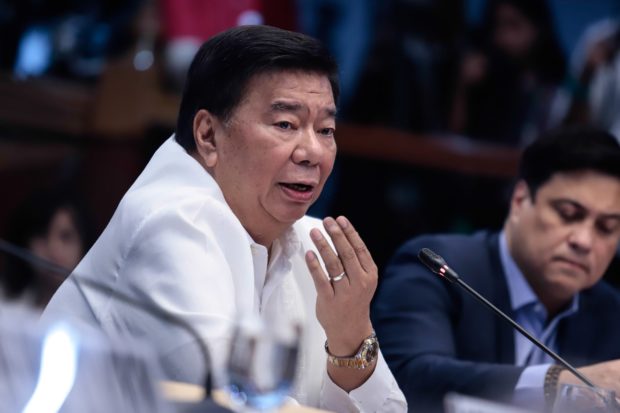 President Duterte’s series of turnabouts on the country’s Visiting Forces Agreement (VFA) with the United States shows why foreign policy ought to be a “shared power” between Malacañang and the Senate, according to Senate Minority Leader Franklin Drilon.

Though he is the chief architect of the country’s diplomatic relationships, “foreign policy is not exclusive to the President,” the senator said on Sunday in response to Mr. Duterte’s latest decision to recall the termination of the VFA, a 22-year-old pact allowing periodic visits of American troops and the holding of war games in the Philippines.

“It is a shared power with the Senate. It cannot be left to the President alone since it involves policy issues, and Congress is the policymaking body in our system of government,” Drilon said.

On Friday, Mr. Duterte withdrew his decision to abrogate the VFA on the heels of a visit from US Secretary of Defense Lloyd Austin III and more than a year after he first announced it in February 2020, followed by a series of six-month suspensions of the termination of the 1999 pact.

In March 2020, Senate leaders, including Drilon, Senate President Vicente Sotto III, Senate President Pro Tempore Ralph Recto and Senate Majority Leader Juan Miguel Zubiri, petitioned the Supreme Court to uphold the authority of the Senate in the withdrawal or termination of treaties and other international pacts, like the VFA.

That case is still pending in the high court.

But, according to Drilon, an earlier Supreme Court decision, in Pangilinan vs Cayetano, already stated that: “The President cannot unilaterally withdraw from treaties that were entered into pursuant to the legislative intent manifested in prior laws, or subsequently affirmed by succeeding laws.”

Drilon said the President’s “ever-changing and shifting stance” on the VFA was a testament to the wisdom of Supreme Court jurisprudence holding that the determination of the country’s foreign policy should be a shared power and responsibility between the President and the Senate.

He said the President’s latest decision on the VFA should strengthen the bilateral relations and military alliance between the Philippines and United States.

Through the VFA, the Philippines and the United States were able to share information, surveillance and perform reconnaissance operations in the West Philippine Sea and Mindanao, according to Drilon.

“The continuation of the VFA can help the country in so many areas most particularly with regard to the preservation of our rights over parts of the West Philippine Sea,” he said.

“The pact has also enabled the US to provide support to the Armed Forces of the Philippines in terms of capability building and acquisition of military equipment,” Drilon said.

Since the VFA took effect in 1999, the Philippines has received about P34 billion in US military grant assistance, according to the senator. INQ