After Duterte threats, VFA back 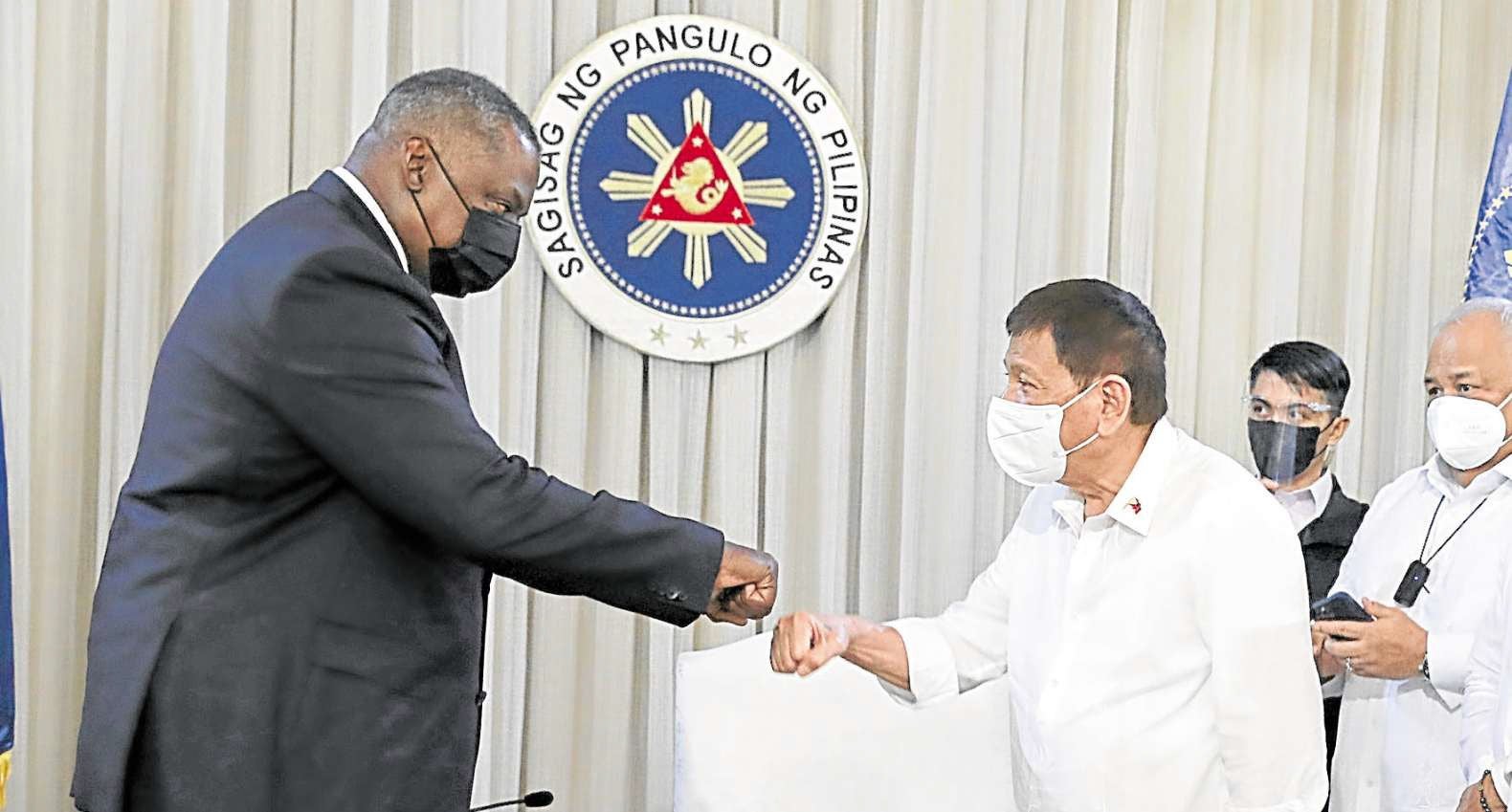 BACK ON TRACK The Visiting Forces Agreement between the Philippines and the United States, in limbo for more than a year, has
been restored in accordance with “strategic core interests.” As though to seal the deal, President Duterte bumps fists with visiting US Defense Secretary Lloyd Austin III. —MALACAÑANG PHOTO

After more than a year in limbo, the Visiting Forces Agreement (VFA) between the Philippines and the United States is “back in full force.”

It took only a visit from US Secretary of Defense Lloyd Austin III for President Duterte to drop his threats to scrap the military pact ratified in 1999 that governs the presence of US troops in the country.

“Last night, after the meeting between Secretary Austin and the President in Malacañang, the President decided to recall or retract the termination letter [on] the VFA,” Defense Secretary Delfin Lorenzana said in a press briefing by the two defense chiefs on Friday.

“The VFA is in full force again. There is no letter of termination pending and we are back on track,” Lorenzana said.

The President ordered the VFA’s termination in February 2020 following the cancellation of the US visa of Sen. Ronald dela Rosa, his friend and ally and a former chief of the Philippine National Police who led his administration’s centerpiece war on drugs.

But four months later, he suspended its termination for six months due to “political and other developments in the region.” The suspension was eventually extended for another six months, and again up to the end of 2020.

Last February, he said America must “pay” if it wanted the VFA to remain in place.

The President’s changed stance is based on the Philippines’ “strategic core interests,” his spokesperson Harry Roque said in a statement on Friday.

Austin called on Mr. Duterte on Thursday night, with the Philippines the last stop in his tour of Southeast Asia after visiting Singapore and Vietnam.

He is the first Cabinet member of the Biden administration to visit the country.

Thanking Mr. Duterte for restoring the VFA, Austin said: “A strong, resilient US-Philippine alliance will remain vital to the security, stability and prosperity of the Indo-Pacific. A fully restored VFA will help us achieve those goals together.”

Austin and Lorenzana discussed ways to enhance the alliance, including support for the modernization of the Philippine military.

Asked by reporters why Mr. Duterte reversed his position on the agreement, Lorenzana said he did not know: “I’m not privy to his decision-making.”

“But one thing is clear: the Department of Foreign Affairs and the ambassador to the United States (Jose Manuel Romualdez) have been … working for this to happen. Maybe the President was just convinced that we could continue with the VFA,” he said.

Last week, Lorenzana said there would be additions but no changes in the VFA’s current provisions.

He has yet to respond to the Inquirer’s questions on the side agreement to implement the VFA.

For international policy and security expert Chester Cabalza, Mr. Duterte’s “hasty softening of heart and mind [toward] Washington can be seen as a balancing act despite his five-year pivot to Beijing.”

“As a result, the China threat still undermines our national interest and sovereignty,” Cabalza told the Inquirer.

Politically, Mr. Duterte’s action may be his way of “playing his cards well” given his avowed intention to seek the vice presidency in 2022, said Cabalza, president and founder of the nonprofit International Development and Security Cooperation.

He said it was “a good thing” that Washington had listened to Manila’s demands and sentiments and ironed out problems with its longtime ally.

“Otherwise, the damage will further cost American interest in the South China Sea,” with Chinese power dominating the region, he said.

Activists who had welcomed the scrapping of the VFA said they were not surprised at the President’s action.

“Duterte was never really serious in terminating the agreement. He did seek more US military aid, the kind that will be used against the Filipino people especially in the regime’s counterinsurgency drive,” said Renato Reyes Jr., secretary general of Bagong Alyansang Makabayan (Bayan).

According to Reyes, the promises of the VFA and the Philippines-US Mutual Defense Treaty (MDT) were falsities peddled by America for the Philippines to remain “a neocolony and military outpost in the Pacific.”

“The VFA will not help us … defend our exclusive economic zone against China,” Reyes said. In Malacañang, Roque said Mr. Duterte’s “decision to recall the abrogation of the VFA is based on upholding [Philippine] strategic core interests, the clear definition of Philippine-US alliance as one between sovereign equals, and clarity of US position on its obligations and commitments under [the MDT].”

Roque said the Philippines would also continue to engage other countries for partnerships based on its core national interests.

Mr. Duterte has had a testy relationship with America, and has bristled over its statements of concern over the killings and rights abuses in the country.

At the House of Representatives, Speaker Lord Allan Velasco and Majority Leader Martin Romualdez were in agreement with Deputy Speaker Rufus Rodriguez’s statement that the restoration of the VFA was “the right decision for the good of the country” as it would strengthen ties with the United States amid the pandemic, the West Philippine Sea dispute and the fight against terrorism.

Said Velasco: “Now, more than ever, we need to maintain strong ties with the United States given the current uncertain and challenging international political environment that was further aggravated by the COVID-19 pandemic.”

Romualdez said it was “crucial” for both nations to strengthen bilateral cooperation especially with the pandemic raging worldwide.

Muntinlupa Rep. Ruffy Biazon, vice chair of the House national defense and security committee, said Austin may have conveyed to Mr. Duterte America’s commitment to stand by the Philippines for “mutual interest and benefit, particularly on security issues.”

“As of now, all we know is that the abrogation was recalled. The advantage we were expecting has not materialized yet, and an improved VFA is nowhere to be seen,” he said.

Albay Rep. Joey Salceda said the continuation of the VFA would better secure freedom of navigation. He said its best use was “helping secure our interests in the West Philippine Sea.”

But the six-member Makabayan bloc said it was an expected move and part of Mr. Duterte’s “Janus-faced foreign policy” and “braggadocio.”