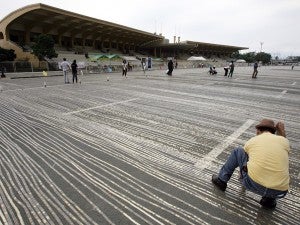 Volunteers arrange coins during an attempt to break the world record of the longest line of coins at the Quirino Grandstand in Manila on Thursday, as part of BAngko Sentral ng Pilipinas’ project dubbed, the "power of small change". NIÑO JESUS ORBETA/INQUIRER

MANILA, Philippines—Philippine civic groups and charities lined up almost 73 kilometers (45 miles) of coins on Wednesday in a bid to set a new Guinness World Record and build schools for the poor.

The project, which aimed to set a new record for the longest line of single-denomination coins, received a better response than anticipated with families thronging Manila’s Quirino Grandstand to donate their coins.

While it will take time to get the official certification from Guinness World Records, organizer Paul Chan said the Philippines had clearly toppled the old record of 64.88 kilometers of pennies set in Fort Scott, Kansas in 2008.

“Unofficially, we have received nearly 73 kilometers of coins already but we cannot state that officially unless a geodetic engineer and an architect certifies it,” as required by Guinness, said Chan.

Businesses, universities and private groups all contributed nearly 3.6 million 25-centavo denomination coins, amounting to about 912,000 pesos ($21,000), which will be used to build schools.

The project, supported by the Bangko Sentral ng Pilipinas, is also intended to bring more coins into circulation to ease a shortage of loose change affecting many businesses, organizers said.

Read Next
US warship makes port call in Manila
EDITORS' PICK
Cherry Mobile teams up with Cloud Panda PH, launches online store
Someone from the Philippines can become $356 Million richer this Tuesday
Philippines’ COVID-19 cases accelerate to 18,638
Duterte certifies as urgent anti-terror bill
Leveling up your ‘lutong bahay’ with the kitchen companion you never knew you needed
‘Puno na lahat:’ Metro workers brave lack of public transport, rains on Day 1 of GCQ
MOST READ
‘If I had not been SolGen, I will make you eat your words,’ Calida tells Coco Martin
5 car dealership outlets shutting down
Quarantine passes no longer required under GCQ, but curfew remains
51 percent of German firms holding back investments in PH, but not because of COVID-19
Don't miss out on the latest news and information.