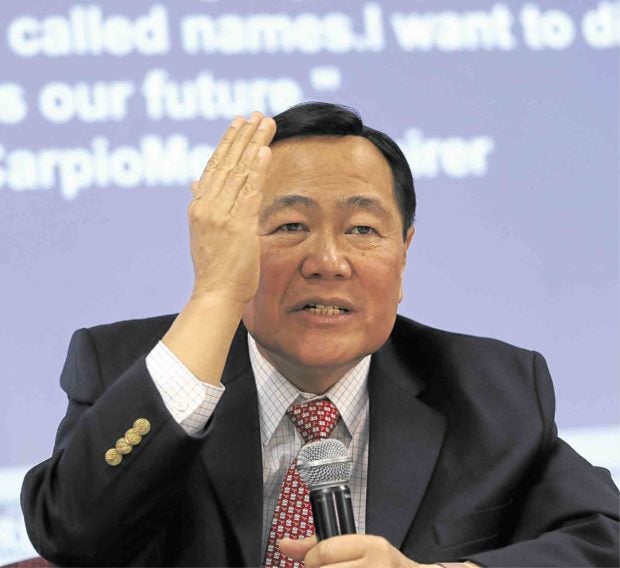 MANILA, Philippines — Former Supreme Court associate justice Antonio Carpio hit President Rodrigo Duterte on Wednesday for staying “faithful to the Chinese propaganda line” when he, once again, downplayed the arbitration ruling favoring the Philippines over the West Philippine Sea issue in his last State of the Nation Address (SONA).

Carpio was referring to Duterte’s statement that China never participated in the arbitration case, thus making the ruling not binding.

The former associate justice, who has been vocal with his criticisms of Duterte’s controversial remarks on the West Philippine Sea, belied this.

“President Duterte has remained faithful to the Chinese propaganda line that the arbitral award is a smeared scrap of paper because China never participated in the arbitration. China and President Duterte are of course grossly mistaken,” Carpio said during a forum of the 1Sambayan coalition following Duterte’s SONA.

According to Carpio, China even submitted its position paper at one point and was given copies of transcripts of the hearing of the West Philippine Sea arbitration case.

“This is totally false. China was given all the opportunity by the arbitral tribunals, to present its side, China even submitted its position paper, and China said, ‘we are not participating, but this is our position paper’,” Carpio said.

“Every pleading that the Philippines submitted, China was given a copy of that pleading. They were given copies of the transcripts of every hearing, but China refused,” he added.

Carpio claimed that China has already previously agreed to submit itself to any future arbitration brought by parties under the United Nations Convention on the Law of the Sea (UNCLOS).

“China also agreed to abide by the UNCLOS arbitration rule which states that, I quote, ‘Absence of a party or failure of a party to defend its case shall not constitute a bar to the proceedings’,” Carpio said.

“In other words very, it’s very clear under the UNCLOS rules of arbitration, if we do not appear, then the arbitration will continue, and China agreed to this. And China did not appear so it cannot complain. China was given every opportunity to preserve its side, to present all its arguments. But China just did not appear,” he added.