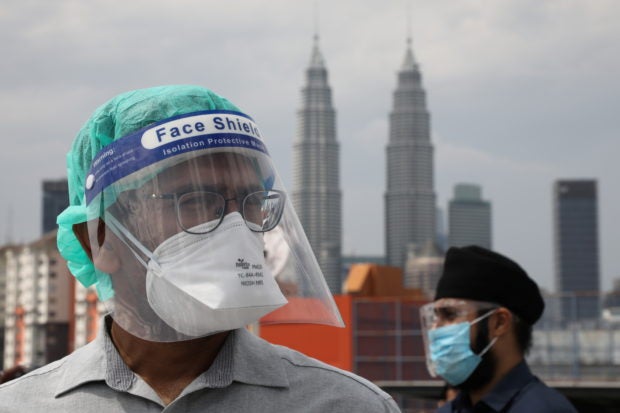 KUALA LUMPUR — Thailand reported a record number of coronavirus cases on Monday, while Malaysia has notched up more than 1 million infections, as the virulent Delta variant carves a deadly path through Southeast Asia – now a global epicenter for the virus.

Thailand had 15,376 new coronavirus cases, a daily record for a second consecutive day in the nation of more than 66 million.

Malaysia, which has one of Southeast Asia’s highest per capita infection rates, reported on Sunday 17,045 new cases, bringing the total to 1,013,438 and nearly 8,000 deaths, despite a being under lockdown since June.

Like many parts of the region of more than 650 million people, Malaysian hospitals and medical staff have borne the brunt of the outbreak amid shortages of beds, ventilators and oxygen.

Thousands of Malaysian contract doctors on Monday staged a walkout over the terms of their employment, though they pledged patients would not be affected by the protest.

The doctors, who want permanent postings, as well as better pay and benefits, said an offer by Prime Minister Muhyiddin Yassin to extend their contracts did not go far enough.

Malaysia’s vaccine rollout, however, has outpaced that of many neighbors, with about 16.9% of its 32 million people fully inoculated.

The Thai central bank has said the wave of infections is expected to reduce gross domestic product in the tourism-dependent country by up to 2% this year.

Indonesia, the region’s most populous country, with more than 270 million people, has Southeast Asia’s biggest caseload. It has reported more than 3.1 million infections and 83,000 deaths.

Still, amid economic pressures, the government on Sunday announced that although coronavirus curbs would be extended by a week, some measures would be relaxed, including allowing traditional markets and restaurants with outdoor areas to reopen.

Hospitals have been filled with patients in the past month, particularly on the densely populated island of Java and in Bali, but on Sunday President Joko Widodo said infections and hospital occupancy had declined, without specifying by how much.

“The decision doesn’t seem to be related to the pandemic, but to economics,” said Pandu Riono, an epidemiologist at the University of Indonesia, urging people to maintain health protocols.

Indonesia last week reported record-high deaths on four separate days, the last of which was 1,566 fatalities on Friday, bringing cumulative deaths to more than 83,000, as authorities pledged to add more intensive-care units.

After successfully containing the virus for much of the pandemic, Vietnam has been facing a renewed outbreak, with southern business hub Ho Chi Minh City and surrounding provinces accounting for most new infections.

The health ministry reported 7,531 infections on Sunday, down from Saturday’s record daily increase of 7,968.

Myanmar has also seen a surge in infections since June and on Sunday reported 355 deaths, a new record, while daily cases topped 6,000 on Thursday last week.

Medics and people working in the funeral industry there say the actual death toll is far higher, with turmoil since February’s military coup hindering the pandemic response.

In the Philippines, authorities have been scrambling to curb the spread of the Delta variant.

Infections have recently started to rise and authorities this week suspended travel from Malaysia and Thailand, as well as tightened restrictions in the Manila area.