Medical workers have been hailed as the heroes of this pandemic; after all, they are at the forefront of this daily and long-drawn battle, providing the world hope that we can emerge from this crisis sooner rather than later. It’s the kind of hope that pushes nurse Rothlie Khy Vidal of the Negros Polymedic Hospital to show up every day on the frontlines—much like her father did years ago in the name of duty.

Vidal is the daughter of the late Sgt. Rolly Vidal, who was killed in action when his only child was just 3 years old. Today, Vidal honors her father’s legacy by giving her best at work, especially because of Covid-19, with the mindset that “every day is a new blessing, and new beginnings give us hope.” 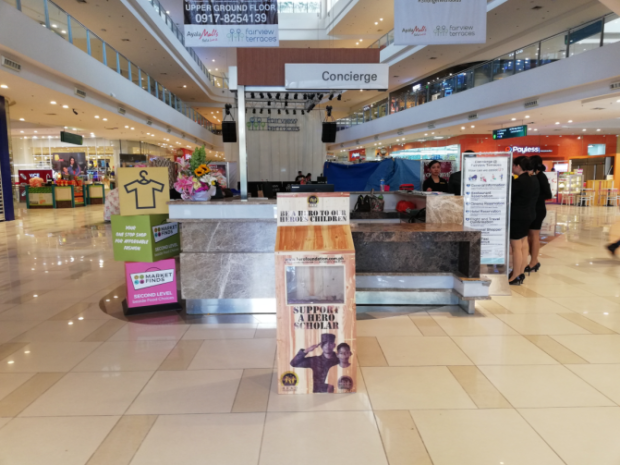 Hero Foundation donation boxes at Ayala Malls (photo taken in 2019) encourage the public to support the education of the children of our fallen soldiers.

It is this strong sense of hope that the Hero (Help Educate and Rear Orphans) Foundation aims to give its beneficiaries and scholars—one of which is Vidal, whose scholarship enabled her to graduate from the Saint Paul University Dumaguete two years ago with a BS Nursing degree—through its strong partnership with the Ayala Land Inc. (ALI), part of which is the Alagang Ayala Land program.

Alagang Ayala Land is a broad community engagement program organized by the company to support COVID-19 response efforts, promote disaster preparedness, and create livelihood through social enterprises. It has recently offered its full support to local government efforts towards the efficient rollout of the vaccination program in the country. Its various developments, such as Ayala Malls Manila Bay, Circuit Makati, and South Park Center, among others, were utilized as vaccination centers by their LGUs, in collaboration with the COVID-19 Inter-Agency Task Force and the Department of Health.

Under this program, ALI has donated 600 Covid-19 vaccine doses to the Hero Foundation, on top of its annual cash donation to the organization of P2.5 million. Vaccine doses will be offered to 300 scholars. A scholar who is 18 years old and above, or one adult member of his or her immediate family, may avail of a free Covid-19 vaccine. 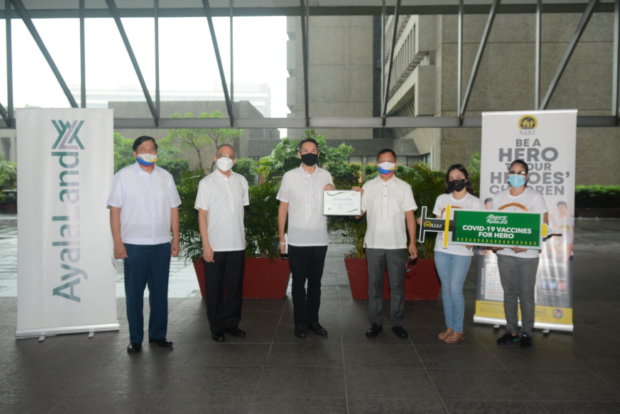 “We hope to make a difference in the lives of the children of our soldiers through Hero Foundation, and will strive to further contribute to its mission of providing scholars with educational support as well as job opportunities when they graduate from school,” says ALI President and CEO Bernard Vincent O. Dy.

The Hero Foundation was established 33 years ago with the help of business leaders, which include Ayala Corporation chair emeritus Jaime Zobel De Ayala.

The Ayala Group has since been involved in the foundation, recognizing the need to sustain funding for the education of the children of our fallen Filipino soldiers. Today, the foundation is led by a board of trustees composed of civic and business leaders. Currently, Fernando Zobel de Ayala is the chair. ALI’s commitment has helped to advance the Hero Foundation’s mission of providing educational subsidies, tuition fees, books, and other miscellaneous support to military orphans. The foundation, with the help of its corporate and individual donors in the private sector, has supported and served a total of 2,702 orphan scholars since 1988.

The vaccination program is also the united effort of the ALI Alagang Ayala Land program and its response to #BrigadangAyala. The latter is Ayala Group’s united contribution to serving people and communities nationwide. It is the corporation’s integrated response to its almost two century-old commitment to national development by doing various social development and corporate social responsibility initiatives—ranging from disaster relief and response, assistance for public education, championing of social enterprises, and public health advocacy, among others.

“Through the Hero Foundation, the Ayala Group is able to give back to Filipino soldiers who sacrifice life and limb to protect the community and maintain peace in our country by assisting in the education of their children when they are no longer able to provide this essential support,” says Dy.