Chinese military drills seen as warning to US, Japan 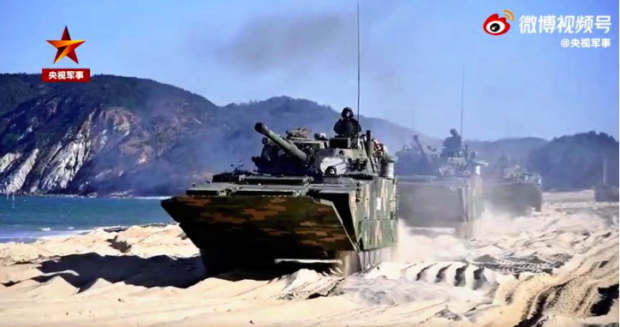 BEIJING — China has been conducting a series of military exercises, including landing operations and sea blockades by mobile forces in anticipation of a Taiwan contingency, according to Chinese media reports.

The drills are seen as an effort to curb moves by Japan and the United States to strengthen relations with Taiwan.

Dozens of amphibious armored vehicles of the 73rd Group Army boarded tank landing ships and conducted a series of day and night live-fire exercises, according to the report.

“The exercises should be seen as a warning” to the United States and “Taiwan secessionists,” according to an opinion piece published in the paper.

The state-run China Central Television and a military newspaper also have reported on the water exercises conducted by the 73rd Group Army on July 9 and 10.

The Global Times also reported July 13 that fighter-bombers from the Northern Theater Command, which oversees northeastern China, conducted a drill to drop mines in the Bohai Sea to set up a sea blockade.

The newspaper reported that the exercise could be applied in a scenario involving foreign military intervention in a Taiwan contingency.

China’s maritime authorities have announced that an area in waters off Zhejiang Province, about 250 kilometers north of Taiwan, is closed to navigation from July 16-21 because of live-fire exercises.

China is thought to be nervous about the administration of U.S. President Joe Biden’s efforts to strengthen relations with Taiwan.

Beijing considers the island to be Chinese territory and its goal is the unification of Taiwan with China.

According to Taiwan media, a U.S. military plane transported supplies to a base on the island on July 15. In response, the Chinese Defense Ministry implied a possibility of taking countermeasures.

The Xi administration also reacted to Japan’s 2021 defense white paper released on July 13, which stated that “stability in the situation in Taiwan is important,” with a Chinese defense ministry spokesman calling it an “interference in China’s internal affairs.”

A source close to the Chinese military said the drills had been “planned in the annual program. But after seeing the U.S. approach to Taiwan, China may have wanted to flaunt its ability to invade Taiwan.”

Another source said, “There is a pressing need to show in China that we have the capability to counter the United States.”