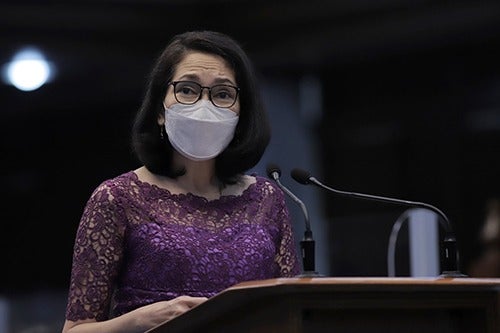 MANILA, Philippines — Senator Risa Hontiveros on Wednesday called on the Department of Foreign Affairs (DFA) to once again summon China’s top diplomat in Manila over the presence of an additional 100 “likely Chinese” ships in the country’s exclusive economic zone (EEZ) in the West Philippine Sea.

(The DFA should once again summon the Chinese Ambassador for a thorough discussion. The incessant incursions of China in our country should no longer continue. We, as a nation, are owed dignity and respect. China is getting used to this.)

Hontiveros cited the report of US-based satellite technology company Simularity, which showed that over 200 “likely Chinese” ships were spotted inside the Philippines’ EEZ.

Since May, the number of ships inside the country’s EEZ spiked from 129 to 238, an increase of over 100 ships, according to Simularity.

The senator expressed hopes that the DFA will lodge another diplomatic protest over this matter.

“Instead of de-escalating the tensions in the disputed waters, they doubled down. This clearly shows that China is shamelessly hellbent on aggravating the situation,” she said.

(We have been protesting for months, appealing and standing up but we were snubbed. Instead of leaving our territory and following the rule of law, it seems that their ships have increased in numbers.)

The senator then reiterated her call for Malacañang to “unambiguously condemn” China’s “incessant” presence in the West Philippine Sea.

Hontiveros had previously urged the Palace to strictly refrain from releasing statements that “weaken our claim in our own waters.”

She further believes that Malacañang should have a “clear position” against China’s incursions, like that of the DFA as well as the Department of National Defense (DND).

“The Palace should look Beijing straight in the eye and tell her (China) to remove her ships from our territories,” she said.

(Now that China seems to be increasing its ships, I think the Palace will now react. If not, it is us Filipinos who should learn to no longer pick a leader who won’t stand up for us.)