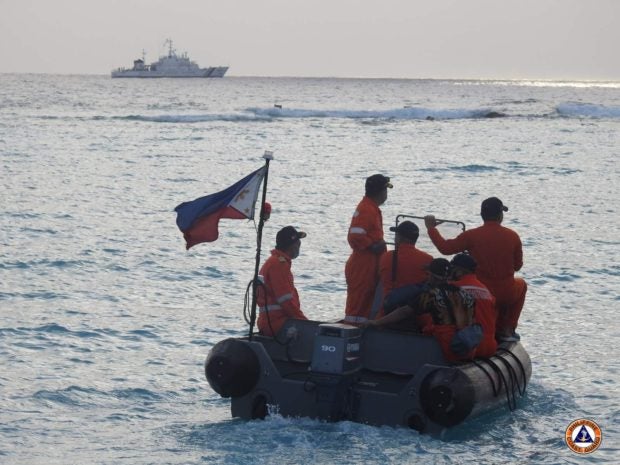 The Philippine Coast Guard (PCG) announced on Sunday (April 25) that it has been conducting drills in the West Philippine Sea since last week as part of efforts to secure “our maritime jurisdiction.” PCG

MANILA, Philippines — Ahead of the fifth anniversary of Manila’s landmark victory against Beijing over the South China Sea, Foreign Affairs Secretary Teodoro Locsin Jr. maintained the finality of the arbitral ruling, adding that the Philippines “firmly” rejects attempts to undermine it.

Calling the arbitral ruling a “milestone in the corpus of international law,” Locsin said the award “conclusively settled the status of historic rights and maritime entitlements in the South China Sea.“

“The Award is final. We firmly reject attempts to undermine it; nay, even erase it from law, history and our collective memories. Anniversaries are an occasion to take stock of the past, mark the gains of the present, look to the future and find ways to work together for mutual benefit since no singular advantage can be gained by violating it,” Locsin said in a statement late Tuesday.

“The Arbitral Award became and continues to be a milestone in the corpus of international law. It is available to other countries with the same problematic maritime features as ours. It puts one issue out of the way of conflict; because there is nothing there taken by force that results in any gain in law,” he added.

The fifth year of Manila’s victory is marked by numerous diplomatic protests filed by the Department of Foreign Affairs (DFA) over recent Chinese incursions in the West Philippine Sea.

It was on July 12, 2016 when the United Nations-backed Permanent Court of Arbitration in The Hague, Netherlands ruled in favor of the Philippines and invalidated China’s expansive claims in the South China Sea, including the West Philippine Sea.

Beijing, however, refused to recognize the said ruling.

“It (ruling) declared as without legal effect claims that exceed geographic and substantive limits of maritime entitlements under the United Nations Convention on the Law of the Sea (UNCLOS),” the foreign affairs chief said.

“So, it did not throw historic claims out the window; it discriminated among them. It dashed among others a nine-dash line; and any expectation that possession is 9/10ths of the law.  Because the mere fact of possession produces no legal effect, such as a territorial sea of any extent,” he added.

Locsin said the arbitral award “benefits the world across the board.”

“We do not see it as directed at any other country, near or far. We see it as it should be seen: as favoring all which are similarly situated by clarifying definitively a legal situation beyond the reach of arms to change. It puts this aspect of international law beyond the limit of prescription,” he added.

Locsin further stressed President Rodrigo Duterte’s pronouncement before the United Nations General Assembly in September last year that the award is not part of international law and is “beyond compromise and beyond the reach of passing governments to dilute, diminish or abandon.”

“The Philippines is proud to have contributed to the international rules-based order, to the affirmation of UNCLOS, and the strengthening of the legal order over the seas,” the secretary added.

Locsin also considers the arbitral ruling a “gift” of the Philippines to other countries.

“It is a gift from a country that’s not a power except for right in law. In 2012 we were David all alone, up against Goliath, amid hosts of indifferent spectators. We had not a friend or ally; we were lucky to get any attention at all. And then we prevailed; or rather right prevailed,” he added.

“For the Arbitral Award was given to a set of maritime circumstances that would be as true in our waters as in others’. It is the legacy that a-not-rich country leaves to mankind along with a greater prospect of peace and cooperation,” he further said.

Meanwhile, Locsin underscored the commitment of the Philippines to achieve a “peaceful” South China Sea.

“For as long as nations abide by the rule of law and not of military might, the Award is the North Star that will keep us on course in the present, and that will point us back to the right direction in the future should we, in a moment of weakness or inaction, lose our way,” he said.

China and countries that have conflicting territorial claims over the South China Sea, including Association of Southeast Asian Nations (Asean) members Philippines, Vietnam, Malaysia, and Brunei, have been negotiating for a Code of Conduct, an accord that seeks to prevent the escalation of tensions in the disputed waterway.

The Philippines serves as the country coordinator for Asean-China dialogues.