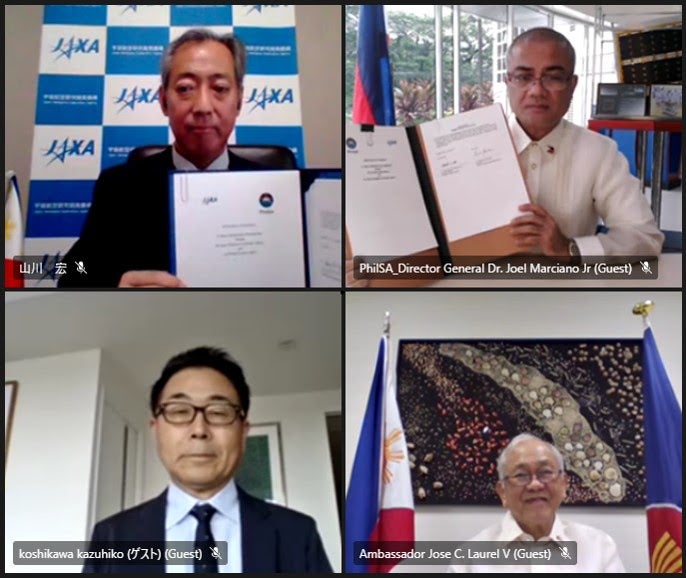 MANILA, Philippines — The Philippines and Japan have signed an agreement on space cooperation, the Department of Foreign Affairs (DFA) said Wednesday.

The memorandum, according to the DFA, seeks to provide a framework of cooperation in a number of areas, including space applications, satellite development, and the promotion of the space industry.

“As we sign this agreement, we look back to what our country has been able to achieve in space over a relatively short period of time, and how Japan has contributed substantially to those efforts. Today, with JAXA, we look to further that cooperation as we continue to build forward, inspire, and open more opportunities for Filipinos to access and benefit from space,” Marciano said in a statement released by the DFA.

“We bring to this cooperation our people and their experience from the Diwata and Maya satellites, along with our investments in ground infrastructure and capabilities for processing and analyzing spaceborne data. Together, we will create even more value from these activities and cascade them further to society” he added.

Philippine Ambassador to Japan Jose Laurel V lauded the signing of the agreement on the year when the two countries are marking the 65th anniversary of their diplomatic relations and the 10th year of their strategic partnership.

“I congratulate PhilSA and JAXA in laying this groundwork, and I, along with my colleagues in the Embassy, am proud to be part of this effort, because our small investments today will mobilize generations who come after us in their bid to conquer new frontiers,” Laurel said in the same DFA statement.

“Today is indeed a fitting tribute to a remarkable bilateral relationship,” he added.

This year, the Philippines’ second nanosatellite, Maya-2 CubeSat, was transported to the International Space Station through JAXA, and released into space to conduct a scientific demonstration of imaging and store-and-forward communications, the DFA noted.

Maya-2 was completed by Filipino engineers in cooperation with the Kyushu Institute of Technology, with funding from the Philippine government through the Department of Science and Technology, the DFA added.

Meanwhile, other satellites such as the Diwata microsatellites were also completed in collaboration with Japanese universities and launched through JAXA.

According to the DFA, the Philippines continues to engage in various activities spearheaded by JAXA, namely the annual Asia Pacific Regional Space Agency Forum (APRSAF), the National Space Legislation Initiative (NSLI), and the Sentinel Asia.

The Philippines, which hosted the APRSAF in 2016, has “been regularly participating in its various working groups as a venue for exchanging experiences and best practices in space development and utilization,” the DFA said.

“Through the efforts of the PhilSA and the [DFA], the country also contributed to the drafting of the NSLI report, which was submitted to the 60th session of the Legal Subcommittee of the United Nations Committee on the Peaceful Uses of Outer Space,” it added.

First nanosatellite made by Filipinos returns from space after 2 years

Read Next
AFP to continue work with US after Duterte suspends end of VFA
EDITORS' PICK
Miss Universe Philippines partners with JC
Rabiya Mateo admits dating an older man and jokes: ‘Tatay pala ‘yung hinahanap’
Smart powers Liga Adarna Season 4: Race to the Top
Who is Julian Ongpin?
Duterte orders review of conduct of war on drugs
No evidence to warrant filing of homicide case vs Julian Ongpin – police
MOST READ
LOOK: Angel Locsin inspires with weight loss progress
Gordon: Senate uncovered ‘mother of all corruption’ under Duterte admin
Gordon dares Duterte to prove he pocketed PDAF given to Red Cross
Who is Julian Ongpin?
Don't miss out on the latest news and information.