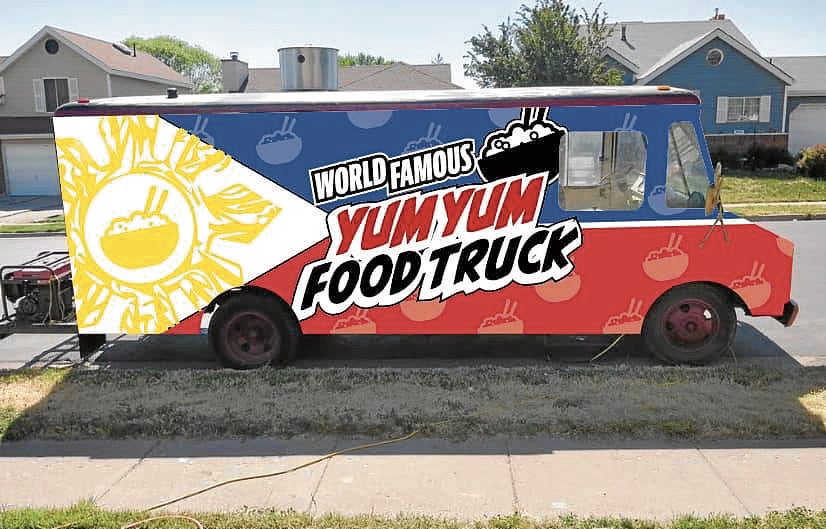 PROUD PINOY COLORS Days after it was vandalized with racial slurs in Utah, the World Famous YumYum Food Truck now proudly sports the tri-color of the Philippine flag as if to defy the anti-Asian sentiments that defaced it. In an online post, the food truck owners thanked Utah Jazz star Jordan Clarkson and Dan from Identity Graphics for the new look that will be unveiled on the business’ grand reopening on June 12, Philippine Independence Day. —PHOTOS FROM WORLD FAMOUS YUMYUM FOOD TRUCK FACEBOOK PAGE AND CLARKSON’S TWITTER ACCOUNT

MANILA, Philippines — Philippine officials in New York have condemned the latest anti-Asian attack against a Filipino-American man who was repeatedly punched in the face at a subway station in Manhattan.

“We strongly condemn this latest anti-Asian hate crime that targeted a member of the Filipino Community in New York City,” Philippine Consul General in New York Elmer Cato said in a statement.

“We again call on authorities to take the necessary steps to protect members of the AAPI (Asian Americans and Pacific Islanders) Community,” he added.

Based on reports, the 52-year-old Filipino man, who was not named, initially noticed another Asian-looking man being attacked when he got off the train at the 103rd Street station on the Upper East Side on Tuesday night.

The assailant was apparently yelling “go back to where you came from” while attacking the victim, who eventually managed to escape.

According to a report by ABC 7 New York, the assailant then turned to the Filipino, cornered him, and repeatedly hit him on the face while hurling anti-Asian invectives at him.

The incident is the latest in a series of racist attacks on Asians that intensified soon after the COVID-19 pandemic hit the United States. In his speeches last year, former US President Donald fanned anti-Asian sentiments by blaming the virus on China, using such terms as “kung flu” and “China virus.”

Easily the deadliest anti-Asian incident this year was the mass shooting at several spas in Atlanta, Georgia by Robert Aaron Long, that killed six Asian American women on March 16.

Prior to the subway punching incident, a Filipino food truck in Utah was vandalized with racial slurs this week.

“I know the pain that hateful language and racism causes. With the help from @identitygraphx we’ll be able to restore the truck and hopefully lift Ben [Pierce] and his family’s spirit! #StopAsianHate,” the NBA star said.

“I stand in solidarity with Utah’s Filipino community – love is more powerful than hate! #utahfilipino #StopAAPIHate #stopasianhate,” Clarkson said in another tweet.

Last month, US President Joe Biden signed into law the COVID-19 Hate Crimes Act that overwhelmingly passed Congress in a rare show of bipartisanship, following a spate of high-profile attacks on Asian Americans in the wake of the coronavirus pandemic.

The Department of Foreign Affairs earlier urged Filipinos to remain vigilant and to immediately report any incident of hate crimes against members of the Filipino Community in the US to the Philippine Embassy or Consulates General in the United States.

According to the AAPI Hate website, some 9 percent of the total 6,603 hate incidents it recorded from March 2020 to March 2021 were reported by Filipinos.

AAPI Hate, which was created by several advocacy groups, tracks and responds to incidents of hate, violence,

harassment, discrimination, shunning, and child bullying against Asian Americans and Pacific Islanders in the United States.

Among the recent incidents of hate crimes against Fil-Ams was the attack in March on an elderly Filipino woman who was pushed and repeatedly kicked on a sidewalk in Manhattan by a burly man who was reportedly yelling “You don’t belong here” at her.

A CCTV footage released by the New York police on March 30 showed the man violently attacking the 65-year-old woman as bystanders and staff inside a plush residential building seemingly looked on without intervening.

On Feb. 8, Noel Quintana, 61, was on his way to work on a New York subway train when he was slashed with a box cutter across the face after he got into a dispute with another man.

Quintana said the suspect was kicking his backpack during the commute and when he asked him to stop, the man attacked him and ran off when the train stopped. He was left bleeding inside the subway train and largely ignored by other commuters. Quintana needed almost 100 stitches on his face.

On June 6, 70-year-old Filipino Cesar Echano sustained a black eye after he was punched by a white man who first verbally attacked him and his wife while they were walking in a park in Cerritos, California.

On March 13, Alex Vidal was riding the New York City subway when another passenger, who thought he was Chinese, started yelling at him. He was left alone with the suspect because the other passengers had moved to the other carriages when the man started hurling invectives. Vidal, who did not react but took a video of the incident, said he felt “luckier” than other Asians who were seriously injured or killed in similar hostile encounters.

On Feb. 18, 74-year-old Juanito Falcon died two days after police discovered him severely injured in a parking lot of a fast-food restaurant in the area of 17th Avenue and Bethany Home in Arizona. The assailant was arrested and is being held on a $500,000 bond, but the police have yet to determine the motive for the attack.

These incidents prompted Romualdez to write letters to some senators who are members of the justice committee and the racial discrimination committee of the US Senate. —With a report by Arianne Aine Suarez (Inquirer Archives, stopaapihate.org)