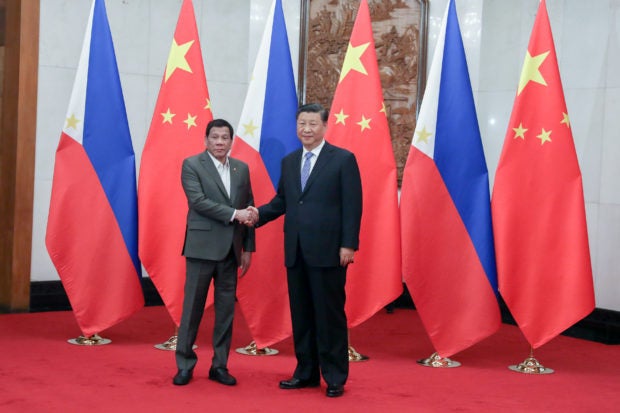 President Rodrigo Duterte and China President Xi Jinping pose for posterity prior to the start of the bilateral meeting at the Diaoyutai State Guesthouse in Beijing on Aug. 29, 2019. (File photo by REY BANIQUET / Presidential Photographers Division)

MANILA, Philippines — The Philippines and China need to work on “win-win cooperation” to make sure that their relations will remain a “partnership for greater peace, progress, and prosperity.”

That’s part of the message that President Rodrigo Duterte to Chinese President Xi Jinping that was released on Wednesday on the 46th anniversary of Philippine-China diplomatic relations.

Duterte underscored the “deep and abiding friendship” between the two countries that had grown and deepened through “concrete and purposive cooperation.”

“In the face of the challenges of a global pandemic, China’s timely acts of solidarity and assistance have helped the Philippines take crucial steps towards healing and economic recovery,” Duterte said.

In some of his past televised briefings, Duterte said that Filipinos owed a debt of gratitude to China for the vaccines it had donated and sold to the country.

Duterte also said that the countries’ economic ties were a “dynamic force” that would continue to drive their bilateral relations forward.

He said he was confident that his administration’s “Build, Build, Build” program and China’s Belt and Road Initiative would “ reap long-term benefits for our peoples.”

“As we approach the golden anniversary of our diplomatic ties, win-win cooperation will ensure that our relations will remain a partnership for greater peace, progress, and prosperity for our countries and the larger region,” Duterte said.

Duterte: We owe debt of gratitude to China