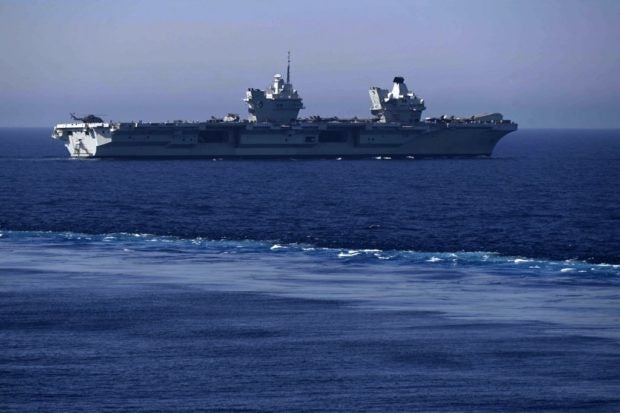 UK Royal Navy’s aircraft carrier HMS Queen Elizabeth sails during the Navy exercise “Gallic strike” off the coast of Toulon, south-eastern France on June 3, 2021. – This unprecedented joint maneuver called “Gallic Strike”, which has mobilized since two days 14 warships and 56 combat aircraft off the coast of Toulon, aims in particular to train to conduct strikes from the sea, and to operate jointly the tricolor Rafale Marine fighter planes, catapulted, and the British F-35s which take off vertically or using a springboard. (Photo by Christophe SIMON / AFP)

MANILA, Philippines—Defense Secretary Delfin Lorenzana welcomed the UK carrier strike group headed to the region on a mission to promote freedom of navigation in the South China Sea and highlight its deeper security role in the Pacific.

A port visit to Manila of the strike group’s component vessel was set, according to Arsenio Andolong, director and spokesperson of the Department of National Defense (DND). Earlier reports said the UK ships were expected to make several port visits during its seven-month voyage.

The carrier strike group will demonstrate freedom of navigation in the South China Sea, which China is claiming to own, and promote closer relations between the Philippines and UK, Andolong said.

The strike force is led by 60,000-ton aircraft carrier HMS Queen Elizabeth, marking its maiden deployment. Before sailing for South China Sea, it will conduct exercises in the Mediterranean Sea and Indian Ocean.

Analysts have said the deployment was a demonstration of unity and commitment with the US in its growing rivalry with China, which is aggressively enforcing its baseless territorial claims in the South China Sea.

Britain’s deployment of its largest naval flotilla to the region in recent years was one of the issues discussed by Lorenzana and British ambassador to the Philippines Daniel Pruce in an online call on Wednesday (June 2).

“The secretary shared ongoing efforts in the Philippines to raise understanding and build capacity in dealing with the situation in the South China Sea,” said Andolong.

Pruce reiterated the UK’s position that the United Nations Convention on the Law of the Sea (Unclos) must take precedence in the South China Sea and the UK’s readiness in supporting capacity-building efforts for countries under threat by China’s aggression.

Lorenzana and Pruce also discussed defense cooperation between the Philippines and UK, like upgrade projects, counterterrorism campaigns and the creation of a resident defense attache post in both countries.

The Philippines and the UK will convene the 2nd Joint Defense Committee  Meeting this month, Andolong said.

Lorenzana also thanked Pruce for the UK’s crucial role in the delivery of the AstraZeneca vaccines to the Philippines.