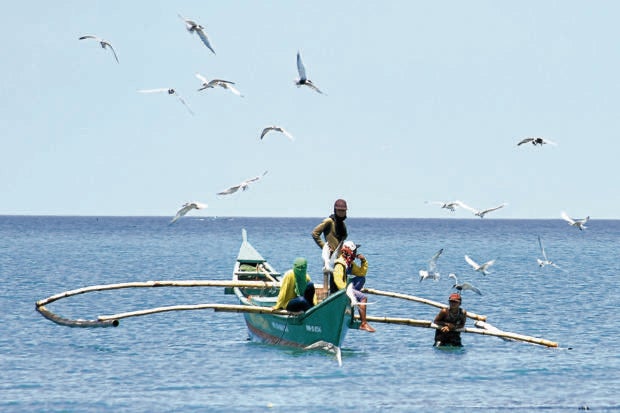 AVOIDING SCARBOROUGH To avoid confrontations with the Chinese at Panatag (Scarborough) Shoal, a traditional rich fishing ground, some Filipino fishermen from Zambales and Pangasinan provinces, like this group, try their luck at alternative sites closer to home. —WILLIE LOMIBAO

MANILA, Philippines — The Philippines has filed a diplomatic protest against China’s fishing ban in the South China Sea, saying the prohibition encroaches into parts of the country’s exclusive economic zone (EEZ) and puts Filipino fishermen at risk of attack from the Chinese Coast Guard.

Fishermen and conservation groups on Wednesday also denounced the May 1-Aug. 16 ban which covers waters north of the 12th parallel and two of the 12 fishing management areas (FMAs) of the Philippines—designated as zones 5 and 6 by the Bureau of Fisheries and Aquatic Resources (BFAR).

The Chinese regulation’s encroachment on Philippine territory “is a violation of Philippine sovereignty and sovereign rights,” Ivy Banzon Abalos, spokesperson for the Department of Foreign Affairs (DFA), told reporters on Tuesday, a day after Manila lodged its protest with Beijing.

“And with the new Chinese Coast Guard law, it effectively grants the Chinese Coast Guard freedom and authority to use force within what it considers its maritime jurisdiction,” Abalos said. “This can curtail and put at risk the legitimate rights of Filipino fishermen to fish in Philippine territorial waters and EEZ.”

Under that law, the Chinese Coast Guard is allowed to “take all necessary measures, including the use of weapons when national sovereignty, sovereign rights, and jurisdiction are being illegally infringed upon by foreign organizations or individuals at sea.”

The DFA earlier protested against the law, which Foreign Secretary Teodoro Locsin Jr. said was “a verbal threat of war to any country that defies” it.

The DFA said China’s unilateral ban did not exempt areas with the Philippines’ EEZ and did not limit it to Chinese vessels.

Citing Paragraph 716 of the July 2016 arbitral award on the South China Sea, it said the prohibition breached Article 56 of the 1982 United Nations Convention on the Law of the Sea (Unclos) “with respect to the Philippines’ sovereign rights over the living resources of its EEZ.”

The award refers to the ruling of the arbitral tribunal that invalidated China’s sweeping claims to the South China Sea, including the West Philippine Sea (WPS).

The award also affirmed the traditional and legitimate fishing rights of Filipino fishermen.

“China’s annual fishing moratorium extends far beyond China’s legitimate maritime entitlements under Unclos and is without basis under international law. China cannot legally impose nor legally enforce such a moratorium in the West Philippine Sea,” the DFA said in a statement on Tuesday.

It also strongly urged China “to desist from any action and activity that infringes on Philippine sovereignty, sovereign rights, and jurisdiction, in contravention of international law.”

The National Task Force for the West Philippine Sea has told Filipino fishermen to ignore the Chinese ban and continue fishing in Philippine waters.

In an online video conference with representatives of the international marine conservation group Oceana, resident Geographic Information System expert Jessie Floren said the ban was controversial in that it did not define the longitudinal areas covered.

The FMAs designated by BFAR are protected by science-based measures and are delineated based on a number of factors, including the fish stocks available, the structure of fisheries and the distribution of their resources, among others.

According to Asis Perez, convener of Tugon Kabuhayan and former BFAR chief, FMA 5 and 6 are critical to maintaining the fish supply of the provinces around those areas and also of Metro Manila.

About 70 percent of Palawan’s catch of “galunggong,” or round scad, goes to the metropolis while Mindoro supplies tuna. Waters off Zambales and Ilocos also yield tuna, galunggong and other pelagic species, he said.

The fisherfolk group Pambansang Lakas ng Kilusang Mamamalakaya ng Pilipinas (Pamalakaya) on Wednesday said China had “no right and moral ascendancy to impose a fishing ban under the pretext of conservation as they are the ones plundering marine resources through reclamation and annexation activities.”

“There is actually an indefinite and undeclared fishing ban in nearly the entire South China Sea, courtesy of the continued presence of Chinese vessels that create intimidation among Filipino fishers,” it added.

Zambales fishermen have reportedly abandoned their usual fishing grounds after being harassed by the Chinese Coast Guard.

Both Pamalakaya and Oceana called on President Rodrigo Duterte to assert the country’s rights and to heighten maritime patrols in the West Philippine Sea.

Oceana Philippines legal and policy director Liza Osorio said that while the Philippines’ resources were dwarfed by China’s marine arsenal, the government should use diplomatic channels to assert its sovereign rights in its EEZ.

Sen. Risa Hontiveros supported the DFA’s pronouncement against China’s fishing ban, as the 2016 arbitral award affirmed the legitimate fishing rights of Filipinos in their territorial waters.

“This is only one of the many reasons why our 2016 victory is certainly not a mere piece of paper, as some of our officials claim,” she said in a statement, referring to such statement from Duterte himself.

She called on the Philippine Navy, Philippine Coast Guard, BFAR and the Filipino fisherfolk to continue patrolling and venturing out to sea.

“I hope that we in the Philippines, we who have the legal right in the WPS, can unanimously agree to take ownership of a territory that is rightfully ours,” she said.

—WITH A REPORT FROM MELVIN GASCON

Village official gunned down in Bulacan