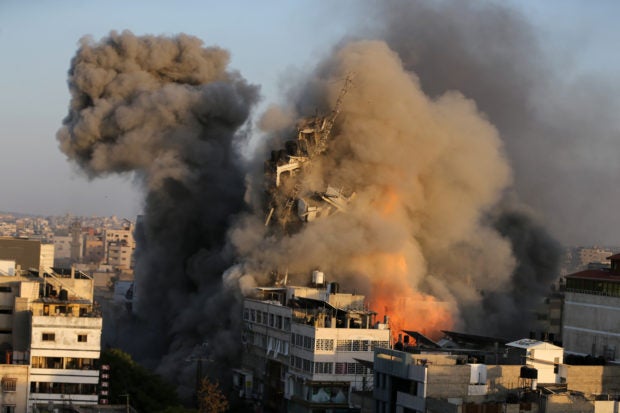 FILE – Smoke rises as a tower building collapses after it was hit by Israeli air strikes amid a flare-up of Israeli-Palestinian violence, in Gaza City May 12, 2021. REUTERS/Ibraheem Abu Mustafa

MANILA, Philippines — Many Filipinos in Israel – especially in coastal southern cities — and in Gaza are left in “trauma” as Philippine labor authorities prepare for rescue amid the escalating conflict between Israeli security forces and Palestinian militants.

Israel Labor Attaché Rodolfo Gabasan said there are no injuries or deaths reported among Filipinos, but many are suffering from trauma amid rocket attacks and the sound of violence in the cities.

(Filipinos are not used to the sound of explosions. Those sounds of fatal explosions can cause us trauma.)

According to Gabasan, around 300 Filipinos are staying in Ashdod and Ashkelon that are being targeted by the worst rocket attacks from Hamas, an Islamist militant group based in Gaza.

He said the Philippines’ crisis management committee in Israel is preparing if the Israel government opts for a land invasion of Gaza. He added that should the situation further escalate, Filipinos in Ashdod and Ashkelon would have to be prioritized for rescue.

“Sila ang ipaprioritize kung mag-escalate ang situation to a war. We have to evacuate them to a safer place,” said the labor attaché.

Labor authorities are looking at around 100 Filipinos in the said cities who are willing to be rescued.

But Gabasan said that Filipinos could not be extracted yet in the two cities because of the still ongoing rocket offensives.

According to Gabasan, 10 Filipinos in Gaza need to be rescued more urgently amid worse attacks in the territory as the Israeli military retaliates. Gabasan said they are not overseas Filipino workers (OFWs) but those who have married Palestinian nationals.

He also advised Filipinos in Israel to follow measures being imposed by the Israeli government and to immediately seek refuge in bomb shelters when sirens are sounded.

Filipino authorities have already coordinated with churches in Tel Aviv and the hotel association in Israel for the availability of staging and evacuation areas for Filipinos who would be extracted from Ashkelon and Ashdod.

Gabasan said that under alert level 1, the priority for Filipinos is to get to a safe place, not immediate repatriation. He said a deployment ban for Israel will be imposed once the alert status is raised to level 2.

“We just like to assure them, if anything, if they need to be extracted in their place, handa kami dyan (we are ready for that). But we have to follow also the protocol kung ano ang sasabihin ng home defense command ng Israel (that will be advised by the home defense command of Israel),” Gabasan said.