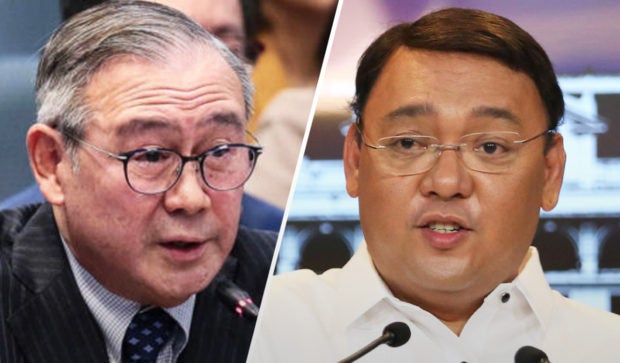 MANILA, Philippines — The last remarks of President Duterte’s spokesperson Harry Roque on the matter of his speaking on matters of international law did not seem to be the last of it, after all.

While Foreign Affairs Secretary Teodoro Locsin Jr. said that Roque’s pronouncements was fine with him, Manila’s top diplomat said that remarks made by the Palace official do not reflect the country’s foreign policy.

“I told him to go ahead. I enjoy his spirited responses. What he says isn’t foreign policy. When he makes a mistake he will know on Twitter. But his take on history is interesting though history never ripens into right,” Locsin said on Twitter Friday.

I told him to go ahead. I enjoy his spirited responses. What he says isn't foreign policy. When he makes a mistake he will know on Twitter. But his take on history is interesting though history never ripens into right. What history can do is try to cover up wrong with the sands https://t.co/FUJFX9WAE3

“What history can do is try to cover up wrong with the sands of time but the people wronged can keep brushing away the sand to show the wrong. Time cannot make wrong right even if the people wronged are enslaved or exterminated by the wrongdoer. But wrong is still not right. It is just history. The history of wrong,”  he went on.

INQUIRER.net tried to get Roque’s side, but he has yet to respond to our request for comment.

Locsin’s tweet was in response to Roque saying he would not stop speaking on matters of international law even after the foreign affairs chief called him out for his comments on the Julian Felipe Reef.

Earlier this week, Roque said critics were only making a big deal out of Chinese presence near Julian Felipe Reef because the area had “never” been in the possession of the Philippines. He claimed that the reef is not within the country’s exclusive economic zone (EEZ).

However, the Department of Foreign Affairs (DFA) maintained its stance on the matter.

In previous statements, the DFA said Julian Felipe Reef is about 175 nautical miles west of Bataraza, Palawan, and well within the 200-nautical mile EEZ rule according to the United Nations Convention on the Law of the Sea.

Locsin then unleashed a series of tweets apparently chiding Roque, asserting that DFA “has exclusive remit” on Philippine foreign relations and also telling the presidential spokesman to “drop the subject” and leave the matter to the DFA.