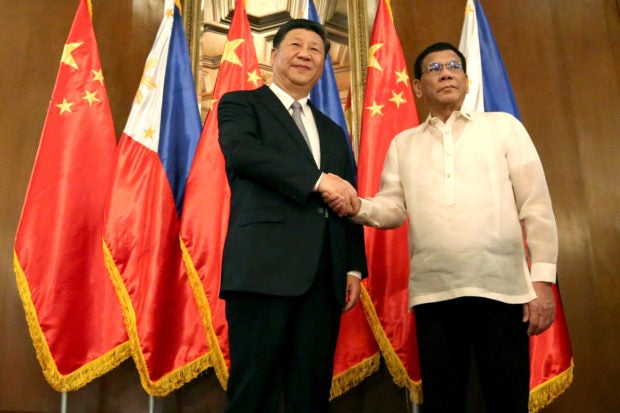 President Rodrigo Roa Duterte and President Xi Jinping of People’s Republic of China pose for a photo prior to their expanded bilateral meeting at the Malacañan Palace on November 20, 2018. (RICHARD MADELO/PRESIDENTIAL PHOTO)

Carpio made the remark when he was asked about Duterte’s motivation behind his statements regarding the West Philippine Sea, such as calling The Hague ruling, which favored the Philippines over China in the maritime dispute, “just a scrap of paper to be thrown away in a wastebasket.

“I think he just—he honestly believes that China is in possession [of the West Philippine Sea], that that’s the only thing I can conclude, because he has been saying that repeatedly, at least five times,” Carpio said in an interview on ABS-CBN News Channel’s Headstart.

Carpio likewise said that Duterte sees Xi as his “personal protector” should the military stage a coup d’etat against him.

“The President has always said that if there is a mutiny or coup against me, President Xi Jinping will protect me,” Carpio said.

“I think that is what’s behind his mind that President Xi Jinping is his personal protector against his own military if there is a coup d’etat, so he will side, whenever possible, with China against the Philippine interest and we see that every day,” he added.

In 2018, Duterte was reported as saying: “The assurances of Xi Jinping were very encouraging…’We will not allow you to be taken out from your office, and we will not allow the Philippines to go to the dogs.”

Duterte and Carpio have been engaged in a word war over the issue of the West Philippine Sea.

At one point, Duterte even challenged Carpio to a debate.

When Carpio, however, accepted the challenge, presidential spokesperson Harry Roque said he will instead represent Duterte in the debate.

Read Next
WATCH: INQside Look with Elmer Cato, Consul General of PH in New York
EDITORS' PICK
Palace says ICC prosecutor report is ‘fantastical,’ based on ‘hearsay’
Synology NAS: A photo storage and multimedia server for your home
Ready, get set, travel: NCR Plus tourists now free to visit MGCQ areas
Smart brings KCON:TACT especially 4U to subscribers from June 19 to 27
Kai Sotto, Angelo Kouame lead Gilas final 12 vs South Korea
Palace: Duterte unfazed by ICC probe on drug war killings
MOST READ
Sotto sees Sara, Pacquiao as ‘formidable competitors’ for president
Duterte to meet with Sotto, Velasco to discuss fate of BARMM polls
Opposition ‘must go beyond anti-Duterte platform’ in 2022 polls – Drilon
NCR Plus tourists of all ages can travel to MGCQ areas until June 30 — DOT
Don't miss out on the latest news and information.

Duterte to meet with Sotto, Velasco to discuss fate of BARMM polls