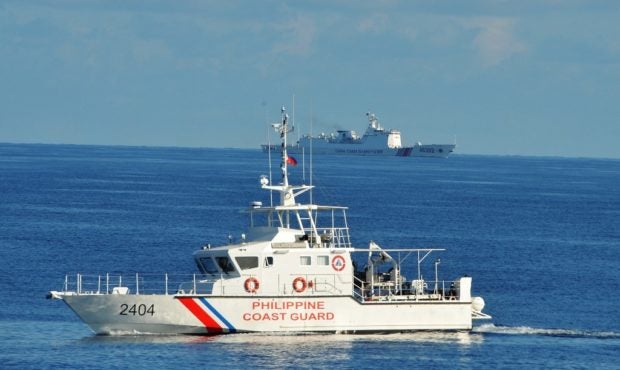 A recent photo shows a Philippine coast guard ship sailing past a Chinese coastguard ship during a joint search and rescue exercise between Philippine and US coastguards near Scarborough shoal, in the South China Sea. -(Photo by TED ALJIBE / AFP)

MANILA, Philippines — Two senators called on the Philippine Coast Guard (PCG) to remain vigilant and keep up the pressure on Chinese vessels moored in the West Philippine Sea.

Senator Panfilo Lacson, the chairperson of the Senate national defense committee, stressed that Philippine forces “must keep alert over our territory.”

“We must not let our guard down. Since the 1990s, China has already made three incursions into our exclusive economic zone (EEZ): Scarborough Shoal, Panatag Shoal and now, Julian Felipe Reef,” Lacson, who commended the PCG, said in a statement.

“They are likely to do so again if we relax,” he added.

The PCG and the Bureau of Fisheries and Aquatic Resources (BFAR) in Sabina Shoal threw a challenge when they spotted seven Chinese vessels moored in a linear formation last April 27, the National Task Force for the West Philippine Sea (NTF-WPS) reported on Wednesday.

The PCG crew issued a set of challenges that the Chinese vessels didn’t respond to at first. But 20 minutes later, they dispersed and left.

Two days later, the PCG returned to Sabina and again sighted five Chinese ships, but they dispersed immediately as soon as the Philippine vessel arrived.

Senator Risa Hontiveros congratulated the PCG as well as the BFAR for “confronting” the Chinese vessels.

“Considering the escalating tensions in the WPS (West Philippine Sea), I know it couldn’t have been easy to challenge China’s ships. This reassures me that indeed we have good officers on the ground and in the water, ready to do their duty,” she said in a separate statement.

(I hope these opportunities will continue. We saw that driving away Chinese ships can be done and should be done repeatedly. I hope this inspires more authorities to do the same.)

Manila and Beijing are embroiled in a long-running maritime dispute.

China’s sweeping claim to the South China Sea, including portions of the West Philippine Sea, was challenged by the Philippines through the International Permanent Court of Arbitration (IPCA) in The Hague in 2013.

The Hague-based court ruled in the Philippines’ favor in July 2016. Beijing has consistently refused to recognize the ruling.

“We have the absolute right to stand our ground, and shoo illegal vessels away. The UNCLOS and our 2016 arbitral award at the Hague reaffirm our legitimate sovereign rights over the WPS. Tayo ang nasa tama, kaya tayo ang dapat maglakas-loob (We are in the right that’s why we should be the one showing courage),” Hontiveros went on.

“Our officers should know that we, Filipinos, will always stand by them. We know we own the West Philippine Sea; now it’s time we act like we do,” she added.