How did she do it? The woman who made the Chinese ships go away | Global News
Close
menu
search

How did she do it? The woman who made the Chinese ships go away 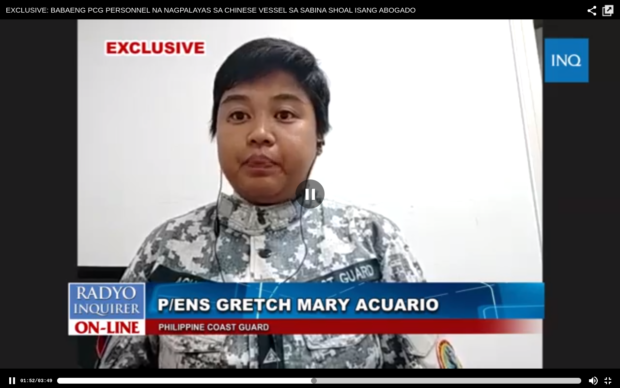 MANILA, Philippines — Lawyer and member of the Philippine Coast Guard (PCG) Gretch Mary Acuario gave a detailed account of the events that transpired in their maritime operation that led to the shooing away of Chinese vessels in the Sabina Shoal in the West Philippine Sea.

In particular, she talked about what her radio challenge did.

Acuario, in a Radyo Inquirer exclusive interview, said the BRP Cabra approached the group of foreign vessels to ask for certain information during a radio challenge, but the seven foreign ships eventually dispersed rather than answer.

(We were conducting maritime patrol when the radar detected foreign vessels in Sabina Shoal. We approached the unidentified foreign ship, which we then challenged.) 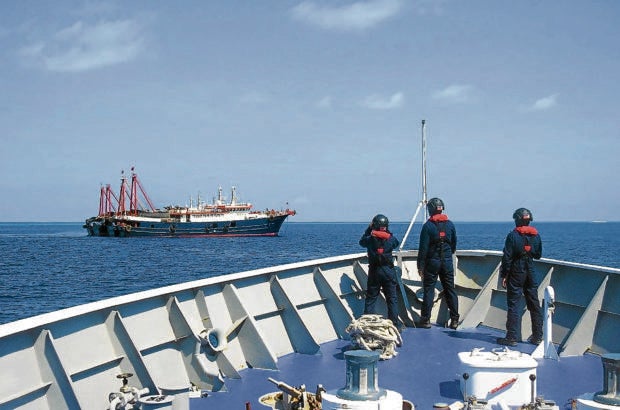 THIS IS OURS Philippine Coast Guard (PCG) personnel aboard BRP Cabra monitor Chinese vessels at Sabina Shoal west of Palawan province in this photo taken by the PCG on April 27. The Filipino crew informed the Chinese that they were inside the Philippines’ exclusive economic zone. The Chinese ships left as Cabra approached them. FILE PHOTO

Sabina Shoal, the one closest to El Nido, is part of the BRP Cabra’s domain of patrol, according to Acuario.

“Unidentified foreign vessel at Sabina Shoal, this is Philippine Coast Guard, you are within the Philippine exclusive economic zone… You are requested to provide the following: name of vessel, intention, last and next port of call,” Acuario said in a pre-recorded message transmitted to the Chinese vessels.

But instead of giving the PCG’s a response, the Chinese vessels began to disperse before the Philippine ships -the BRP Cabra, and the BFAR vessels MCS-3002 and MCS-3004 – reached them.

(There were seven [vessels], one lifted its anchor, another one backed off, although slowly, they eventually left one after another.)

The law graduate of the Polytechnic University of the Philippines said she feels honored to be part of the initiative to protect the country’s exclusive economic zone.