Locsin: ‘Outburst of temper’ due to ‘repeated provocations’ by China ‘won’t happen again’ 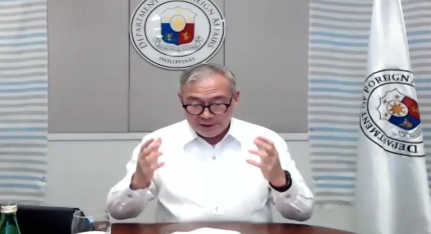 MANILA, Philippines — Foreign Affairs Secretary Teodoro Locsin Jr. said Tuesday – in a seemingly cushioned manner – that his “outburst of temper” due to “repeated provocations” by China against the Philippines “won’t happen again.”

“No megaphone; it was an outburst of temper under repeated provocations in close succession by China against its Philippine neighbor which has kept reaching out for a measure of respect,” Locsin explained in a tweet, after Chinese Foreign Ministry spokesman Wang Wenbin reminded him about “basic manners” in reaction to Manila’s chief envoy’s previous cuss-charged remarks on Beijing’s continuing presence in the West Philippine Sea.

“It won’t happen again. Many any ways to skin a cat; a cleaver is not the right instrument,” he added.

Wang’s statement that was posted on China’s Foreign Ministry website has called out the supposed “megaphone diplomacy” which “can only undermine mutual trust rather than change reality.”

Locsin on Monday unleashed an expletive-laced tweet demanding Chinese vessels to “get the f*ck out” of Philippine waters as the Department of Foreign Affairs (DFA) protested the “illegal presence” and “belligerent actions” of the Chinese Coast Guard in Bajo de Masinloc (Scarborough Shoal).

‘Not and never China’s’

But while Locsin said the Chinese side is “free to say whatever it wants,” he insisted that “the entirety of the West Philippine Sea and Scarborough Shoal belongs to the Philippines not by mere claim but by absolute right and legal victory.”

I don’t deny China’s claim; it is free to say whatever it wants; but I do insist that the entirety of the West Philippine Sea and Scarborough Shoal belongs to the Philippines not by mere claim but by absolute right and legal victory that, President Duterte said, can never be https://t.co/M8tYl8WGvu

This ruling, Locsin said, “can never be compromised or alienated in any manner and to an extent however small,” citing President Rodrigo Duterte’s remarks during the United Nations General Assembly in September last year.

“Every drop of water and every feature within our Exclusive Economic Zone—and outside it like Pag-asa—is ours and not and never China’s,” the DFA chief added.

Earlier Tuesday, Locsin issued an apology to Chinese Foreign Minister Wang Yi over his remarks, saying he does not want to lose his friendship with Beijing’s top diplomat.

That’s right. I suddenly realized my friendship with Wang Yi was on the line so I tweeted my concern about our friendship. That must continue. He’s my idol in diplomacy. (I think his idol and mine is Lavrov.) I add Mike Pompeo. Blinken is emerging as a force in his own right. https://t.co/w6t3jGf9R9

“I just don’t want to lose my friendship with the most elegant mind in diplomacy with manners to match. Wish I didn’t have a hair-trigger temper but what can you do,” he said.