globalnation / Nation
Nation
Why he did not join Senate resolution?

MANILA, Philippines — Refuting criticisms for not signing a Senate resolution condemning China’s reported illegal activities in the West Philippine Sea, Senator Manny Pacquiao claimed Friday he wrote a letter to the Chinese government even before the said resolution was filed.

Pacquiao said he did not sign the resolution initiated by Senate Minority Leader Franklin Drilon since he already wrote a “personal letter” addressed to Chinese Ambassador Huang Xilian.

In his letter dated April 10, Pacquiao said he is “deeply alarmed” by reports that 220 Chinese vessels believed to be “manned by Chinese maritime militia personnel” were spotted at the Julian Felipe Reef in the West Philippine Sea. 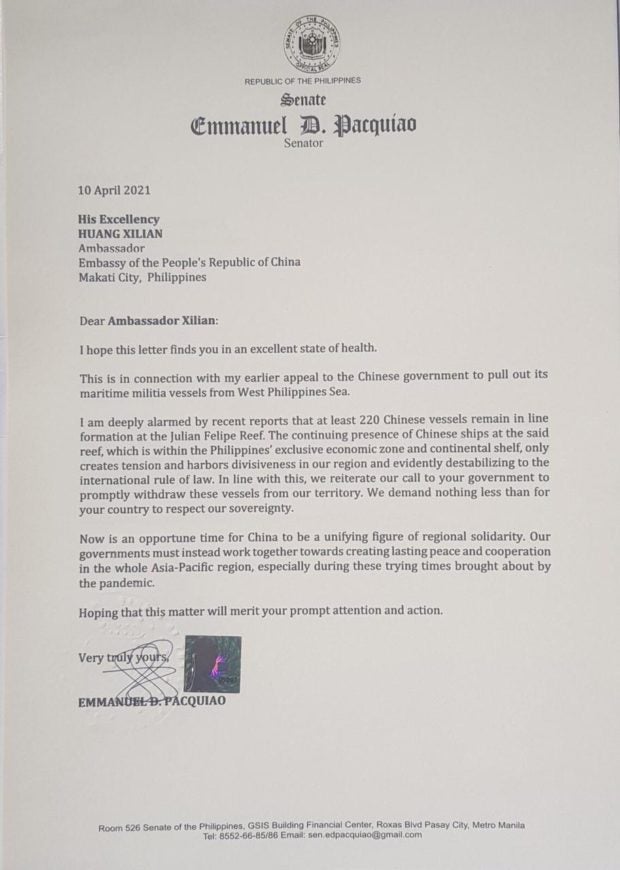 A copy of Senator Manny Pacquiao’s letter to China

“The continuing presence of Chinese ships at the territory, which is within the Philippines’ exclusive economic zone and continental shelf, only creates tension and harbors divisiveness in our region and evidently destabilizing to the international rule of law,” Pacquiao’s letter read.

“In line with this, we reiterate our call to your government to promptly withdraw these vessels from our territory. We demand nothing less than for your country to respect our sovereignty,” it added.

Further, Pacquiao said in his letter that China and the Philippines must instead work together towards “creating lasting peace and cooperation in the whole Asia-Pacific region, especially during these trying times brought about by the pandemic.”

On April 26, a Senate resolution was filed condemning in the “strongest possible terms” the reported illegal activities of China in the Philippines’ exclusive economic zone and other parts of the West Philippine Sea.

Eleven senators signed the resolution lamenting the continued presence of Chinese vessels in disputed areas despite a series of diplomatic protests lodged by the Department of Foreign Affairs and strong public statements by Philippine authorities.

Health warning up as parts of PH sizzle