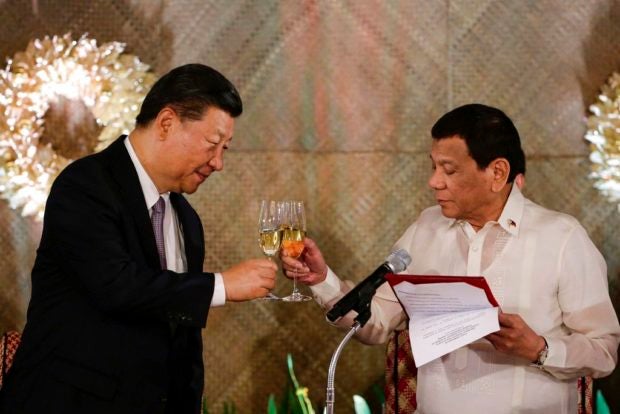 “There is no truth to the speculation of a purported ‘verbal fishing agreement’ between President Rodrigo Roa Duterte and President Xi Jinping, nor that Chinese vessels were encouraged to stay in the West Philippine Sea despite the diplomatic protests and strongly-worded statements of Philippine government officials,” presidential spokesperson Harry Roque said in a statement.

“This is without basis and is quite simply [a] conjecture,” he added.

Roque issued this statement even as Duterte himself said almost two years ago that he was allowing China to fish in the Philippines’ exclusive economic zone (EEZ), citing a deal he made with Xi in 2016.

“We cannot drive them away because they have insisted that it’s theirs,” the President said during the 122nd founding anniversary of the Presidential Security Group at Malacañang Park in June 2019.

He also had said that he had an agreement with Xi to allow China to fish in the Philippines’ EEZ after Beijing granted Filipino fishermen access to Scarborough Shoal.

“Would you allow the fisherman to fish? Of course. That was our agreement,” the President said in a 2019 speech in Malacañang, recalling his talk with the Chinese leader.

Salvador Panelo, Duterte’s spokesperson then, even said the verbal fishing deal was “legally binding” despite some Cabinet officials claiming it was not enforceable.

But for Roque, any fishing agreement under the Philippines’ laws “can only be done through a treaty.”

Citing the Vienna Convention on the Law on Treaties, Roque said “a treaty is an international agreement concluded between States in written form.”

“Clearly, a treaty must be in writing. No such treaty or agreement exists between the Philippines and China,” he noted.

“The President does not condone unlawful commercial fishing by any state on Philippine waters. However, the President also recognizes that subsistence (non-commercial) fishing may be allowed as a recognition of the traditional fishing rights pointed out by the Arbitral Tribunal itself in its Award on Jurisdiction (para. 407) in the case between the Philippines and China,” he further stressed.

Roque appealed to “stop making malicious speculations” and instead focus on productive activities at a time of the pandemic.

In a recent pre-recorded speech, Duterte said he would only confront China once its starts drilling for oil and other resources, as there was not enough fish to “quarrel” about in the West Philippine Sea.